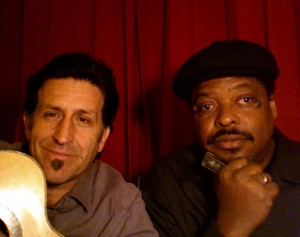 George Kilby Jr spent many years both playing and producing for the Late and Legendary Pinetop Perkins. Pinetop's recent passing has urged him to revisit the traditional blues format, which is a departure from his usual hybrid/alternative style of blues. Joining Kilby on the recording and on stage is the harmonica ace Phil Wiggins, who was half of the internationally famous acoustic blues duo "Cephas and Wiggins". The passing of John Cephas has enabled Wiggins to take on new projects, of which is the partnership with Kilby. As ambassadors of the Piedmont blues, Cephas and Wiggins took their music to venues including Carnegie Hall, Sydney Opera House, Royal Albert Hall, and the White House. Kilby and Wiggins met at a blues festival in July and have been collaborating since then.

Kilby's new song " You never see the hand throw the Stone" is a lyrically biting Delta Blues that touches on racism, hypocrisy in religon, and the financial meltdown. Wiggins and Kilby recently recorded the song, which will be available at the time of the shows on itunes and will be pre-released to several radio stations.