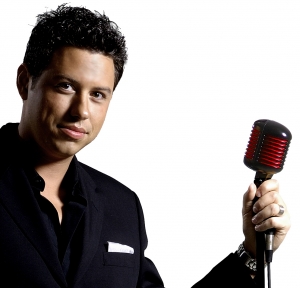 Aaron Minick was born and raised in Madisonville, Kentucky. Aaron has been around recording studios and stages all of his life. His father was a member of The Happy Goodmans, a group that Aaron would eventually sing with when Howard Goodman later became too ill to travel.

Aaron's musical talent drove him to be a session drummer at 15, and he was playing drums on the road with major tours by the time he turned 18. At 20 years of age, he was already producing records.

Aaron's singing style has been compared to a young Frank Sinatra. One listen to his voice, and you'll agree. Vestal Goodman was among the first to note the similarities to Ol' Blue Eyes. She would often compel him onto the stage with, "Come out here, darlin', sing Amazing Grace like Frank Sinatra would do it."

Who else do you know who drives a 1970 turquoise green Cadillac, and decorates his house in all things retro? Aaron Minick blends today's technology with yesterday's cool. Model-handsome, he looks like he just stepped off a magazine cover from the 1950's.

Aaron's passion is music. He owns and operates The Sound Shop, the legendary Nashville recording studio, formerly owned by Buddy Killen. Countless music legends such as Paul McCartney, Ray Charles and Dolly Parton, have recorded there.

Doors continue to open for this unique talent. At a time when we would all love to return to a more peaceful and innocent time, Aaron Minick has hit on something that resonates with audiences. The future looks bright for Aaron Minick.
0
What's This
Advertisement