Billy Droze - To Whom It May Concern 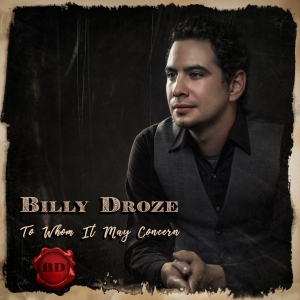 Rural Rhythm Records is proud to announce “To Whom It May Concern”, the label debut album by hit-song writer Billy Droze. Produced by Billy Droze and Ronnie Bowman, the album will be released on July 28th and includes two Bluegrass hit singles, “Better With Time” and “Kentucky Blue”.

“Billy Droze is one of the freshest songwriting voices to hit bluegrass music in quite some time. He has aknack for the memorable line, tremendous skill assembling melodies, and the natural feel for what makesa great song...” –John Lawless / Bluegrass Today

11. TO WHOM IT MAY CONCERN
(Billy Droze / Ronnie Bowman)

“To Whom It May Concern” shows that Billy Droze is truly a unique artist and hit songwriter, with lyrics that dig deep into the heart of life, melodies and a guitar style that combine his traditional roots with a modern twist that’s all his own, and a voice so soulful, earthy and sincere that every song seems to draw you in to believe and enjoy his brand of American Music.

“This is one of the best and freshest albums I've heard in a long time. From start to finish, it firmly held my interest. Billy Droze is an artist to watch!” -Kyle Cantrell / Bluegrass Junction – SiriusXM Radio
20
What's This
Advertisement