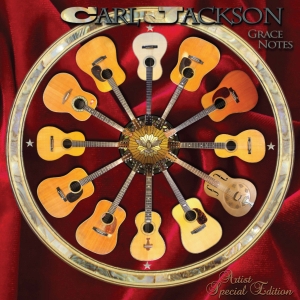 Multiple Grammy award winner, Carl Jackson, was born in the small town of Louisville, Mississippi on September 18, 1953. By the time he was eight years old, thanks to his parent’s influence and a burning desire inside, he was already well on his way to being an accomplished musician.

At the age of 14 he was invited to play banjo for Jim and Jesse and the Virginia Boys, one of the most respected bluegrass bands at that time. After five years with them, Jackson tested the musical waters elsewhere before landing a job with Glen Campbell, where he remained for 12 years.

Between 1984 and 1985, Jackson charted three singles on the Billboard country music charts, including the No. 44 hit "She's Gone, Gone, Gone". He also earned the International Bluegrass Music Association's Song of the Year award in 1990 for "Little Mountain Church House", which was recorded by Doyle Lawson, as well as Ricky Skaggs and the Nitty Gritty Dirt Band.

Jackson has written songs performed by Glen Campbell ("Letter To Home"), Garth Brooks ("Against the Grain", "Fit for a King"), Vince Gill ("No Future In The Past”), Pam Tillis (“Put Yourself In My Place”), and Rhonda Vincent ("I'm Not Over You"), among hundreds of others.

Jackson's "Lonesome Dove" was recorded by co-writer Larry Cordle and Lonesome Standard Time, Ricky Skaggs, and Trisha Yearwood, in addition to his own rendition on the 1991 Grammy winning album with John Starling, "Spring Training", which featured Emmylou Harris and her Nash Ramblers band.

One of Carl’s finest production successes is entitled “Livin’, Lovin’, Losin’ – Songs Of The Louvin Brothers” and was the 2003 Grammy winner for Country Album of the Year. “How’s The World Treating You”, an incredible duet from the album, featuring James Taylor and Alison Krauss also won the Grammy for vocal collaboration. The CD included three performances by Carl himself; one with songwriting pals, Larry Cordle & Jerry Salley, one with country legend, Merle Haggard, and one with the incredible Linda Ronstadt.

Jackson, a Mississippi Musician’s Hall of Fame member and Governor’s Award winner, was honored with an official Country Music Trail Marker in his hometown of Louisville on December 26th, 2011. The beautiful marker, which highlights Jackson’s career, stands within a stone’s throw of the historic Strand Theatre. Carl performs his annual “Home For Christmas” concert every December in the very building where he used to see movies as a kid, not to mention being born on the third floor, which housed a clinic back in 1953.

Carl’s latest project, Grace Notes, is a guitar instrumental portrait of dearly loved hymns. It was recorded using a collection of rare acoustic guitars, some dating back to the mid 1800’s.
Since those days in Mississippi fifty some odd years ago, two-time SPBGMA songwriter of the year, Carl Jackson, has realized many of his dreams. But with each dream that becomes a reality, a new dream lies ahead...........