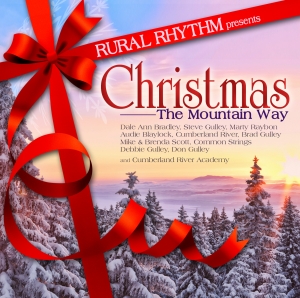 CHRISTMAS: THE MOUNTAIN WAY is a live performance musical show that showcases Christmas and its traditions in the Appalachian Mountains.

“Christmas is a very special time in our hearts and souls. It connects us with family, friends and traditions passed down through the generations. Over the years working with many artists with ties to the mountain community I have heard a strong recurring message about The Mountain Way. We have asked some artist friends to help us put together a TV special filled with all the traditions, memories and cherished music that represents the charm, beauty and grace of “Christmas: The Mountain Way”, Sam Passamano, II - Executive Producer / President Rural Rhythm Records.

Artist / Album Producer Steve Gulley: “Growing up in the East Tennessee Mountains near the Cumberland Gap National Historic Park, I learned early on the respect and reverence the people of the mountains hold for the Christmas holiday. I’m proud to say that tradition still holds true today in the Cumberland Mountains that I love so dear. Technology, money, commercialism and the “flavor of the month” mentality that has evolved over the years for so many is replaced with old fashioned values, tradition, heritage and thankful praise. I believe this videotaping will let the rest of the world get a glimpse of true Americana and allow the spirit of the season to shine through in the brightest of ways. I’m proud to be a part of this production and share Christmas the best way I know…..Christmas: The Mountain Way.

“CHRISTMAS: THE MOUNTAIN WAY” will air on BlueHighways TV (5 million households), during the 2012 Christmas season, with multiple airings in November and December.

“BlueHighways TV is proud to be able to offer this star filled Christmas music special from this picturesque location, the Bell Theater in Pineville, KY”, says Stan Hitchcock, Chairman and CEO of the nationally distributed cable network. “This will be a wonderful gift for our viewers who love bluegrass and mountain music. We thank Rural Rhythm Records and their artists for making it available to us.”

Music from the program will be available in a 2 DISC PACKAGE; one compact disc containing 14 songs and the second, a DVD disc featuring not only the live performance(s) but loads of extra features, including interviews with the artists, stories about their Christmas experiences and a behind the scenes look at the ‘Making of CHRISTMAS: THE MOUNTIAN WAY’.

Nothing But The Blood (3:03) – COMMON STRINGS
(Traditional)

Go Tell It On The Mountain (2:05) – CUMBERLAND RIVER ACADEMY
(Traditional)