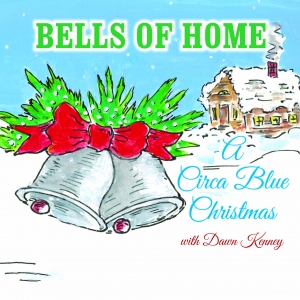 Bells of Home - A New Christmas Single
Circa Blue is proud to announce they have released a new Christmas single titled “Bells of Home” to radio. The song is the title track for their upcoming album releasing later this month. “Bells of Home” was written by David Morris and Dawn Kenny and is now available at AirPlay Direct or by request.

"Every year at National Media Services, we select one prestigious customer to record a Christmas album. For our tenth anniversary it was an easy choice to select Circa Blue. The band came in during the sweltering Summer months and made it Christmas in July in the Upper Room Studios at National Media Services. We couldn't be happier with the result,” said the company.

Co-writer David Morris explains more about the original song, “At its heart, ‘Bells of Home’ gets at something most of us have felt at some point: Being homesick at the holidays. Once we identified a soldier as our narrator, the possibilities for images and contrasts came pouring out. The hardest part was finding a battle that fit our story line - a fierce firefight, in the snow, on Christmas Eve. We wanted historical accuracy because we knew some listeners would check us. We found what we needed in Belgium in 1944. With the factual frame and a bit of imagination, Dawn and I pulled Bells of Home together quickly. It's a tribute to families, to traditions and to those who gave up their holidays - some temporarily, some permanently - simply because, as the song notes, "some things are worth fighting for."

Danny Paisley, this year’s IBMA Male Vocalist of the Year says, "Bells of Home is a song of a soldiers yearning for home at Christmas time. Circa Blue and Steve Harris' wonderful singing make this a Christmas classic."

"Bells of Home is that hardest thing to find in the musical firmament, a GREAT new Christmas song. While enjoying your freedom this December by the fireplace, as your Christmas tree is shining its lights, listen to the words and music, let them inside and then try, just try, not to shed a grateful tear. Songwriters David Morris and Dawn Kenney, along with Steve Harris and Circa Blue, have created a holiday masterpiece that will find a permanent place in your heart,” says Mike Harris of Trinity River Band.

Stay up-to-date on future announcements including the official album release by visiting www.circa-blue.com.