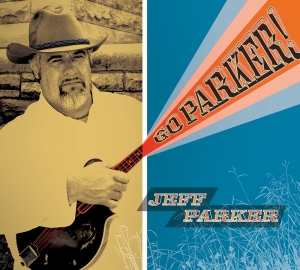 Jeff Parker is a bluegrass music stalwart known for his timeless singing and virtuoso mandolin skills. Parker is currently a vital member of The Dailey and Vincent Band, performing over 100 shows per year worldwide. "Go Parker!" is Jeff's first new cd since 2004's "Two Roads to Travel," which garnered tremendous airplay on bluegrass radio stations around the world.

Recorded at The Lonesome Day Recording Studio in Kentucky, "Go Parker!" is a re-dedication to Jeff's recording career featuring an eclectic mix of songs ranging from heartbreak to lighthearted fun. "Go Parker!," takes its name from jubilant audience members yelling his name when he takes the stage each night. It features special guests Dailey and Vincent on the tracks "Plant Some Flowers by My Graveside" and "Let's Be Sweethearts Again." In addition, the lovely and talented Cia Cherryholmes duets on "When I Loved You." The collection ends with a cover of Conway Twitty's "Hello Darlin'," which appears as a result of special requests from his fans.