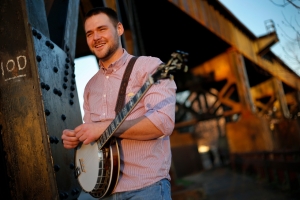 “I basically went in with the idea of cutting the kind of bluegrass album and feel that I enjoy playing,” Davis said. “It's been 6 years or so since I cut my last record. It just felt like the time to do another one. I was lucky to get some great new songs from great writers like Daniel Salyer and Kyle Burnette. There's also a lot of really obscure stuff on here that people probably haven't heard in a long time,” he adds.

Former IBMA Dobro Player of the year, Phil Leadbetter, says "I've had the opportunity to play with many great banjo players in my career, but Jason Davis takes a backseat to no-one. His timing, tone, taste and drive is what all banjo players hope to achieve, but not many ever do.”

Davis began playing banjo around age 10. He was inspired when his uncle Thomas Davis began taking him to local bluegrass festivals. He got his first gig at age 14 with Michelle Nixon and Drive. Three years and two records later, he joined the Kenny and Amanda Smith Band, where he helped record the Grammy-nominated album, "Tell Someone." Next came a stint with BlueRidge, then a three-year tour with Alan Bibey as a founding member of GrassTowne, where he cut two records. In 2008, Jason recorded a solo album, "Steppin Out," which became a finalist for the Ibma instrumental album of the year. Jason lists Flatt & Scruggs, JD Crowe, Terry Baucom, Sammy Shelor and Tom Adams as his biggest influences. He is now extremely busy touring with Junior Sisk and Ramblers Choice.