Joe Mullins & The Radio Ramblers - The Story We Tell 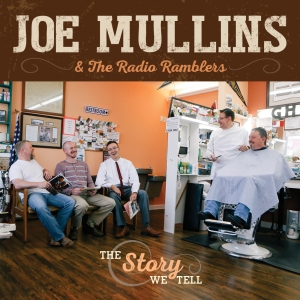 One of the busiest bands in bluegrass, Joe Mullins & The Radio Ramblers (JMRR) have consistently delivered chart-topping and crowd-pleasing music, as evidenced by multiple International Bluegrass Music Association (IBMA) awards and Grand Ole Opry appearances on their resume. Rebel Records is pleased to announce the release of the award-winning band’s sixth album in seven years. The new album, entitled The Story We Tell, brings together a vibrant collection of songs new and old, celebrating the band’s respect for the past while always maintaining a fresh approach.

Featuring Joe Mullins and his banjo, alongside bluegrass veterans Mike Terry (mandolin), Jason Barie (fiddle), Randy Barnes (bass) and Duane Sparks (guitar), The Story We Tell builds on the band’s previ-ous success, but JMRR are not content to rest on their laurels. The Story We Tell features the band’s most inventive and innovative arrangements to date. The creativity makes this a Radio Ramblers project like no other. The album’s opening track and first single, “Long Gone Out West Blues” takes listeners on a trip on horseback through the Wild West. This high-energy song came to JMRR via Canadian folk duo, Pharis & Jason Romero. “The uniquely styled lyrics and the melody made it a natural for us, and the challenge of a song with no chorus is something I love,” says Mullins

The Story We Tell is chock full of original songs from some of today’s top songwriters. One of the final compositions from the late Gerald Evans Jr. is a celebration of what makes our favorite songs so meaningful; “Songs That’ll Get ‘Em” touches on such themes as the warmth of home, the comfort of a mother and the preciousness of true love. Nashville stalwart, Larry Cordle penned the rollicking “If I’d Have Wrote That Song,” an ironic connection, considering that so many have wondered the same thought after hearing Cordle’s hits for Ricky Skaggs, Garth Brooks and Alan Jackson & George Strait, among others. “In The Short Rows Now” from Raleigh Satterwhite hearkens to the days of calloused hands and blistering heat, the hard work invested in the fields and in life and the determination making it through some way, somehow. Jerry Salley (who penned last year’s award-winning Radio Ramblers hit, “All Dressed Up”) and Ronnie Bowman contributed the album’s lone gospel selection, “When God’s In It”, a powerful ode to Philippians 4:13 — “I can do all things through Christ who strengthens me.”

Mullins and company also dug deep into the well of roots music on The Story We Tell. From a lone-some brother duet from the Delmore Brothers (“The Last Old Shovel”), a heartfelt country ballad borrowed from Merle Haggard’s historic Mama Tried album (“I Could Have Gone Right”), and a soaring vocal number the band learned from The Browns (“Would You Care”), The Radio Ramblers showcase variety and virtuosity on The Story We Tell.

Filled with new songs from some of today’s top songwriters alongside forgotten gems with hall of fame pedigrees, the balance achieved on The Story We Tell flows through the speakers like tuning in to your favorite radio broadcast — a claim only befitting the current IBMA Broadcaster of the Year, Joe Mullins.