Julie Christensen - Where The Fireworks Are 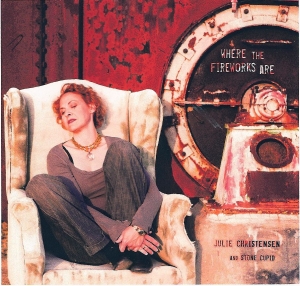 A quick gander at Christensen’s long, winding and heartfelt road in music touches on the landscapes - cultural and actual – which helped shape her "Great Plains Soul" vision. Julie Christensen on Wikipedia

Where The Fireworks Are
Julie Christensen and Stone Cupid


Produced by Julie Christensen with Tom Lackner
Except "Psycho Killer"- Produced by Viggo Mortensen with Travis Dickerson, remixed by Lackner and DuGre

Mixed by by Paul DuGre with Tom Lackner
With mix assistance from Gabe Lackner
At The Tompound in Santa Barbara, CA

Mastered by Paul DuGre in Burbank, CA
Additional Recording by
Jon Rosenberg at Systems Two in Brooklyn, NY,
Jason Mariani at Brotheryn Studios in Ojai, CA
Sean Ingoldsby at Real Time in Ojai, CA,
and Chris Foley at Sound and Vision in Ojai, CA
Art Design and Collage by Amy Schneider
Photos by Michael Kelly except disc image John Diehl
All vocals by Julie Christensen except where noted
Musicians Listed in Track info--

Julie Christensen - bandleader, singer
Julie Christensen's background includes two world-tour stints singing with the great Leonard Cohen, and co-fronting SST post-punk proto-Americana rockers Divine Horsemen in the 1980s. Her brand of "luscious Americana Art-Pop" is showcased in her 2008 Where The Fireworks Are, and her 2012 release "Weeds Like Us" on Household Ink Records out of Santa Barbara. "Weeds" is a collection of songs for the unlucky, brave, and tough produced by Jeff Turmes, of Mavis' Staples' band. Julie has been accompanying herself on guitar lately, surrounded by her many musical friends and allies, and is looking to book concerts, house concerts, festivals and listening room situations throughout the U.S. and Europe. She and her family currently reside in East Nashville, where she has also assembled a band of all-star players (see Stone Cupid here on Airplay Direct) and released a newly finished band album, "The Cardinal," on January 22, 2016.


"--one of the truer singers you’ll ever hear — straight up, no mannerisms, perfect taste; listen to.. her piercing new Something Familiar, and recognize how she could sing with both Leonard Cohen and Chris D. “--Greg Burk L.A. WEEKLY

“Simply put, this gal’s voice can raise every single hair on my body— and all at the same time! Be it R&B, pop, rock, she can sing it all, and with style, too.” -- LA Weekly

"From the heart-wrenching title track, which serves up an aching dose of harsh reality, to the cascading piano that drives the plaintive “Something Pretty,” Where the Fireworks Are is a collection of songs spanning the emotional spectrum. It provides an evocative musical chariot for Christensen to weave her vocal magic." (Brett Leigh-Dicks) VC REPORTER

THANK YOU
TO THE FELLOW TRAVELERS AND MUSICIANS