The Mark Robinson Band Live at The 5 Spot 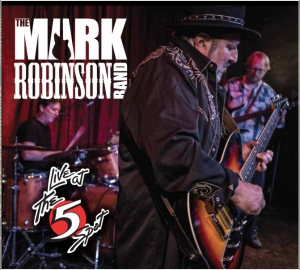 THE MARK ROBINSON BAND LIVE AT THE 5 SPOT

Mark Robinson talks about his new album, 'The Mark Robinson Band Live at The 5 Spot' (Blind Chihuahua) which releases July 7: "This live album is what happened when a blues-rock band got to stretch out and play without limits. It's what I dreamed of doing when I left Indiana and moved to Nashville, Tennessee -- to play guitar in the epicenter of the best music in the world.

"At its core, the Mark Robinson Band consists of Mark Robinson (me) on guitar and vocals, Daniel Seymour on bass, and Rick Schell on drums. We've been playing together for some time now, but recently we've been evolving in our live performances, playing deeper grooves, taking longer solos, mixing it up with tempo changes -- taking chances, going out on a limb, and then bringing it back in.

"We did a series of shows late last year at East Nashville's fabled bar The 5 Spot. It didn't occur to me that the performances could turn into my first live album. After the gig, though, we all knew that something special had happened at those shows. The band -- along with some very talented guests -- had gone where few bands get to go. And The 5 Spot had recorded it all.

"Those recordings really captured the energy and synergy of what we do when we perform in front of an audience. So now, with a little help from my friends, is the CD, The Mark Robinson Band Live at The Five Spot.

"Blues, jazz, rock, country, soul and even a bit of psychedelia end up in extended jams that dig deep into the songs, the instruments, the players -- into the heart of the music.

"We are not your standard blues band. We rock hard, we swing, we take off on musical excursions. It's all about interaction, all of us improvising together.

"I'm so proud of this album. I hope you enjoy it."