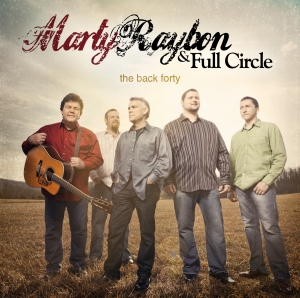 Nashville, TN (January 8, 2013) Rural Rhythm Records is proud to announce the new Bluegrass single, “That
Janie Baker” by Marty Raybon & Full Circle released this week to radio via the label’s Fresh Cut & Key Tracks CD and available at AirplayDirect.com. The song appears on Marty’s straight-up new Bluegrass album, THE
BACK FORTY, releasing in March 2013 celebrating his 40 years entertaining audiences around the world.

Radio stations will certainly be excited to hear the first single release from the album. Terry Herd of Bluegrass Today and Bluegrass Radio Network just heard the tune and commented, “That Janie Baker’ is one of those songs you find yourself singing along with, even before you know the words.”

“My love for hard driving Bluegrass Music was fired up in the early 70’s when my Dad put in an old 8-track
tape of Jimmy Martin and the Sunny Mountain Boys on. The excitement in the music seemed to leap out of the speakers,” said Marty. “While writing ‘That Janie Baker,’ John Fountain and I were not trying to reinvent
the wheel; we were trying to recreate the excitement I felt over 40 years ago. ‘That Janie Baker’ is really
something else.”

Marty has certainly crossed so many genres of music in his 40 year career as evidenced by him leading the way
with seven CGM Fan Award nominations by Christian Voice Magazine. His categories include: Favorite Soloist,
Favorite Male Vocalist, Favorite Crossover Artist, Favorite Musician, Favorite Song (I’ve Seen What He Can Do), Favorite Album (HAND TO THE PLOW), and Living Legend. Fans can view the complete list of top ten
nominees and CAST THEIR VOTE at ChristianVoiceMagazine.com.