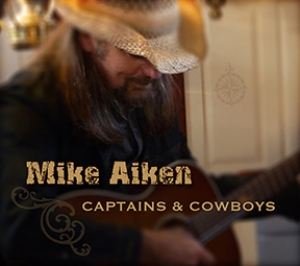 “Let Your Troubles Float Away” This Summer with Mike Aiken’s “Put a Sail on It!”

As summer sails in, Mike Aiken will release the single and video for “Put a Sail on It,” his lighthearted track with some advice we should all take seriously. This is not just another summer song, it is a way of life, a way to let go of your troubles and start new every day. According to Aiken, “It's a matter of choices and attitude. We all have our loads to carry but may I suggest... 'put a sail on' them and they can fade like the setting of the sun.”

The single ships this week on CDX Vol. 595 and is also available on AirPlay Direct. The video will premiere at a special event on Sunday, May 25th at 9 pm in Key West, where most of the footage was taken. Mike Aiken will host the premiere party and local radio station 104.9 FM - The X, will be broadcasting the party live from The Muse/Kelly’s Caribbean at 301 Whitehead Street. Everyone is invited but fans who can’t make it to Key West can join the party on MikeAikenMusic.com, where the action will be streaming live. The party will feature a live performance by Aiken, giveaways and the premiere of the video, which will be projected on a sail (of course!), built by Mack Sails.

The worldwide single and video debut kicks off a summer long contest in which Aiken is asking fans to share how they “put a sail on it” by submitting their photos. Fan photos will be entered into a contest for prizes and considered for use in a follow-up video. Show us what you can put a sail on. Submit your photos at MikeAikenMusic.com.

Following the debut, “Put A Sail On It” can be viewed on Mike Aiken’s YouTube channel.

As the first light of the day peeks over the Chesapeake Bay, Mike Aiken steps off his boat and walks down the dock to load his bus (band schooner) for another run. It’s a scene that’s often repeated but this time he’ll be driving down to Key West with his video crew to shoot footage for his next music video.

This is just another day for Aiken. Some days, you’ll find him writing a song onboard his sailboat, Ocean Girl. On others he might be in Nashville rehearsing with his band or cutting tracks in the studio. On others he might be hosting a songwriting workshop or sailing seminar with his wife, Amy. Or you may not find him stateside at all. Aiken’s love for singing, songwriting, and sailing have taken him all over the world.

Originally from a rural area outside of Buffalo, New York, Mike Aiken is no stranger to hard work. As he says, “My days of being a dirt-dweller, from self-sufficient farming, shoeing horses, raising animals and the battle of too much snow taught me how to make a life with my own hands.” This experience is priceless and Aiken continues to apply these principles daily. A love for music has always been with him and he honed his skills playing in Blues, Southern Rock, and Country bands in Western NY. Mike’s solo career as a songwriter and artist began when he stopped playing in bands and sailed away to distant shores.

The spark for sailing did not ignite until he was a young man working in the inner-city of Buffalo. Aiken could often be found having his lunch on the breakwall of Lake Erie, watching the boats come and go. He quickly realized that if he could get a boat, outfit it properly and learn to navigate, he could go down the Erie Canal, out the Hudson River into the ocean and anywhere in the world. He laughs as he tells the story of the day he bought his first boat. The engine in his old Dodge van had just blown up, he opened the classified ads to look for another vehicle and bought a sailboat instead! It was the true freedom of the open water that brought Aiken out of the cold Great Lakes and eventually to the shores of coastal Virginia, where he resides on his sailboat today. A United States Coast Guard captain, he has sailed tens of thousands of offshore miles along with his wife Amy, making stops along the Canadian Maritimes, US coast, Caribbean and Europe.

For Mike, songwriting and sailing have always gone hand in hand. “There is an honesty and realism I don't find anywhere else but at sea and on a sailboat,” Aiken comments. “It is most certainly not a lifestyle for everyone but it suits me. There is no whining and no one to count on (or blame) but yourself. Mother Nature and the sea just don't allow it. It's the hard working, salt-of-the-earth people I’ve met along the waterfronts around the world who tend to work their way into my songwriting. They remind me of the folks I knew who work the farms and rodeos. They have the same outlook on life, the same strengths and values. It’s the captains and cowboys I’m drawn to. I like being on the move and saltwater tends to run in my veins.”

A songwriter’s arsenal is only as extraordinary as the life they have lived and Mike Aiken has lived! From the Newfie fisherman he met on the docks in Halifax to the Brazilian finger-stylist he traded licks with on seawall in Horta, Azores, he has a vast collection of colorful experiences from places as familiar as your local small town to exotic corners of the world. The inspiration for his songs come from these experiences and the diverse cast of characters that he has met along the way. Aiken’s songs are crafted in different settings, from solo writing sessions while afloat to intimate, back porch collaborations with some of the finest writers in Nashville. His mastery of varied stringed instruments - National steel, baritone, acoustic and electric guitars, mandolin – influences how he writes each song as each instrument speaks differently to him. These rich and varied elements have contributed to a catalogue of music that cannot be defined by one genre or style. Aiken’s songs are so diverse, so honest, that they speak to a global audience and have garnered both success on the charts as well as critical acclaim from the media and his peers.

A positive outlook, a spirit for adventure and a life rich with unforgettable experiences are things Mike Aiken shares in his live performances. The well-travelled troubadour entertains audiences with his spirited band, intimate acoustic sessions and everything in between. His simple love for life is evident in the smile on his face and gentle manner. Meeting him, most think that they have known him all of their lives. His fan base is as diverse as his catalogue of songs and he grows loyal fans wherever he goes. Each year he spends time in Europe performing live and reconnecting with family and friends. No matter the performance, Aiken remains approachable and never leaves a venue until he has connected with every fan waiting to meet him.

“Songwriting is a personal experience for folks of all ages and I’m honored to be able to help others with the process. I've been fortunate over the years for all the inspirational characters who have wandered into my life and left me with bits of wisdom.” Aiken recognizes the lessons he has learned are meant to be shared. Through songwriting workshops, he is able to connect with fans on a deeper level, share his own journey and help them with their own.

Aiken’s outreach is not limited to his experiences as a songwriter. He and his wife Amy, who joins him on stage playing percussion, and has been his shipmate for over 30,000 offshore miles, help other boat enthusiasts realize the dream of sailing offshore for long distances. Together they host what they have dubbed the “songinar,” which provides valuable insight into sailing long distances or outfitting a sailboat for ocean passage while entertaining participants with their stories and songs of the sea.

In addition Aiken hosts an annual festival where he brings together his love of songwriting and his passion for positive influence. “As a kid, I was a hell-raiser and gave my poor parents and teachers a real challenge. It's music that kept me straight, out of the ditch and focused.” Smithfield Music's Aiken & Friends Fest, whose mission is youth music education and celebrating the songwriter, is another avenue for Mike to give back. The idea came to him while sailing back from the Bahamas. Aiken imagined how wonderful it would be to have a festival of original music that you could sail to – and this is it. In its 9th year, taking place in Smithfield, Virginia in October, the festival celebrates the songwriter, with original music and workshops.

As an artist who comes by his stories honestly, Aiken has definitely taken his place among well-respected songwriters and musicians in the Americana and Country communities. Captains & Cowboys, Aiken’s sixth studio album, has received critical acclaim from media and peers in the United States as well as overseas including a first-round GRAMMY nomination. The album, which Aiken co-produced with Dan Baird (Georgia Satellites) and Ben Strano (Jack Sundrud/Poco,) has established Aiken’s presence as songwriter and artist in multiple genres. Various songs have been chosen for compilations and “Chesapeake” was chosen by Sports Illustrated magazine as one of the Top 40 Sports Songs of All Time. He has had five Top 30 singles on the radio in the US and Europe. He has written and produced music for Raceline, America's only weekly syndicated show about NASCAR racing, and penned the ‘On The Road” articles for Singer & Musician Magazine. Aiken always finds time to give back to the community with his philanthropic projects that include the annual Aiken & Friends Fest and the Great Chesapeake Bay Schooner Race that benefits environmental concerns. He is an active endorsee for Takamine Guitars, Ovation Guitars and Mandolins, TKL/Cedar Creek Custom Cases and Levi’s Jeans.
56
What's This
Advertisement