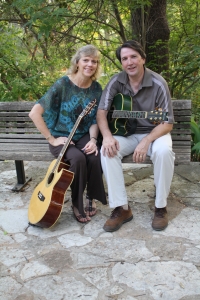 In 1976, Phil Jones, a summa **** laude graduate of the University of Texas, a member of Phi Beta Kappa with a Mensa-level IQ, was stricken with a life-threatening illness for which man has no cure. For the first time in his life, Phil sought God through prayer. To his joy and amazement, he discovered that there is a Living God, who answers prayers, and has the power to heal and guide. Having survived, Phil is living proof of that healing power, and his life has been radically changed.

Debi is self-employed as the proprietor of Austintatious Advertising, a promotional products firm with more than 25 years longevity. An experienced worship leader -- and a talented comedienne -- Debi has been singing, playing guitar, and writing songs since the age of 16. Her life has been transformed by her adult decision to trust in God's holy word.

Phil and Debi have appeared in more than 100 Texas churches, before congregations totaling over 40,000 people.