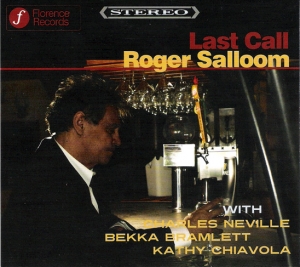 "About this thing we call music, I feel the listener is exactly, completely and totally as important to the art form we call MUSIC as the music maker, no more no less.

Also, I would like to think that my music should be listened to because it is irresistible not because of some sort of compulsion.”

At 19 he was opening for Jose Feliciano. In 1975, he immortalized the town in what the New York Times called, "his own version of Springsteen's 'Born to Run,' called 'Gotta Get Out of Worcester.' "

Roger went to Indiana University in Bloomington in 1966. He chose his major by walking around the campus trying to feel the "vibes" of the various buildings. There and in San Francisco he found his poetic self and started to truly take his song writing seriously.

He migrated his Bloomington band to San Francisco in 1967 playing the Avalon, Fillmore and Carousel Ballrooms with Salloom, Sinclair and Mother Bear. During that time he played with Santana, Van Morrison, BB King, Procol Harum and many other greats.

In 1968, he signed his first recording deal with Chess Records' subsidiary, Cadet Concept. Salloom, Sinclair and Mother Bear received rave reviews and was #1 on the charts of the top FM rock stations in Philadelphia, Cleveland, Boston. It has since become collectible 30 years later. Before long Marshall Chess, Roger¹s champion at the label, went off to be the president of the Rolling Stones' new record label.

The band broke up, but not before Roger Salloom and Robin Sinclair recorded again with Chess in Nashville in 1971 using the Grammy nominated group Area Code 615.

Intrigued with Nashville, Roger spent several years with artists including Guy Clark, Rodney Crowell and Richard Dobbins all of whom were a support team for each other all the time honing their writing skills.

Roger returned to San Francisco where he was sponsored as a songwriter by the former manager of Creedence Clearwater Revival, Jake Rohrer, and CCR's former bass player, Stu Cook.

Roger left California and settled into Northampton, Massachusetts in 1980 to raise his children as a single father. In 1983 he released a recording on the local label, Yellow Plum Records, a recording which became a Billboard Top Album Pick and garnered heavy airplay on some of the most influential stations in the northeast, the exclusive area of its release. It was chosen as Charles Laquidara's Big Mattress Song of the Week on Boston's radio giant WBCN.

He continued to play with greats including The Band (6 times), John Prine (2 times), Jerry Jeff Walker, Rick Danko, The Bodeans, Joan Armatrading, Leon Russell, Jonathan Edwards and many others.

Presently every year Roger performs at the Pines Theater in Northampton. It is the largest outdoor free concert of the year in Western Mass. Thousands of residents of the area have grown up listening to Roger's music. This concert is celebrating its 20th year.

He has performed with Van Morrison, Santana, Cheech and Chong, Doc Watson, NRBQ, Maria Muldaur, Jonathan Edwards, Paul Butterfield and many others.

Roger is still playing, writing and singing better than ever. "It baffles me that I am still getting better!"

In his spare time, Roger and his son, Salem also co-created the nationally syndicated newspaper piece, "Leold" and it was chosen for an animated television show to be executively produced by Mike Scully, executive producer of 'The Simpsons.'

Chris Sautter, winner at the New York International Independent Film Festival for best political documentary, has completed a film about Roger titled, "So Glad I Made It, The Saga of Roger Salloom, America's Best Unknown Songwriter."

Roger has also had songs featured in the films "Love Delivered" and "Rutland USA."

"I have been my own worst enemy for years. At times, I have tried to ignore my music because it brought me pain and exposure, and I thought it was hopeless anyway. But deep in my thoughts I always had the fantasy that I would do one more tour. But first I realized I had to go back to that gorilla in the middle of my living room and have a face-to-face friendly talk...maybe not so friendly."

"I record because I love hearing the playbacks when the band has created something exhilarating. And I love the song and myself when I have written a good song. Sometimes I need to love myself, you know."

"Why do I do it? Well, partly because I am able to do it. And it makes me come alive. I guess, in general, I also love truth and beauty."

"My wife was a catalyst for me. Without her I would likely have not done anything. It's the same old story......talented guy gets lost and someone saves him, but will music lovers be grateful?"

"Some people call my music Americana, while others try to find a label for it and can't. They find it strange that my music is somewhat uncategorizable. What's so strange about that? The real music listeners simply like good music, they are not in love with a category."

"Anyway, I will maybe make something of myself and maybe not. But for those of you not in the music business, this might sound as if it is unfair... if I am good why won't it get noticed. Well, that is not always the way it goes."