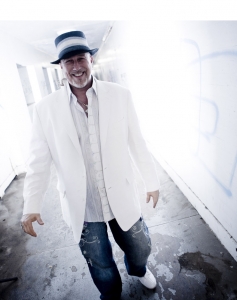 Stacy Mitchhart’s new album is titled 'Live My Life' and it stakes out bold new territory for the veteran entertainer. The set’s 12 tunes are raw, direct and visceral — just like the high-energy concerts that have won Mitchhart a devoted international following and made him the ambassador of the Music City blues scene.

“This album is really about where I am today,” says Mitchhart. “I’m more transparent, just loving what I’m doing and feeling comfortable with myself, and playing the music straight from my heart.”

The results are a mix of down-home blues with a splash of soul that serves as a springboard for Mitchhart’s canny storytelling and meanly elegant guitar. The set’s a departure from his mostly soul-blues flavored catalog, reflecting his deepening connection with the genre’s primal Mississippi roots.

Live My Life kicks off with the grinding blues howler “I Drink Whiskey,” showcasing his dirty licks ‘n’ tricks and culminating in one of his trademark raps — a tongue-in-cheek discourse on the bourbon family. Mitchhart’s off-the-cuff verbal riffing is a beloved signature of his shows. It comes from the deep blues tradition, following in the footsteps of Muddy Waters, Howlin’ Wolf and other historic figures, but always boasts his own distinctive contemporary flavor and flawless comedic timing.

“Live My Life” — the title track — is another beacon of the artist’s newly stripped down approach. In the song, which doubles as the album’s first video release, Mitchhart affirms the joys of life in his cask-cured voice while churning up his own style of mud-caked virtuosity on a blend of raw-boned electric and cigar box guitars. Three tracks on Live My Life include cigar box instruments, which he embraced several years ago after finding a three-string model in a Nashville shop.

“Getting a cigar box guitar made me approach music differently,” he explains. “You have fewer options, and sometimes that can be an advantage. The cigar box is also tuned differently — especially if it’s just got two or three strings. Every instrument sounds different and plays different. They’re real and rootsy.”

While the cigar box guitar brings Mitchhart’s high-powered slide technique to the fore, yet another side of his playing powers the instrumental “Soul Stoll,” which teams an elegant, funky soul-blues groove with flashes of jazz and a sinuous melody.

For Mitchhart, “Soul Stroll” is a flashback to the classic music that was his first love, conjuring visions of Booker T & the M.G.’s, the famed Stax Records house band. The entire album is also a showcase for his own lightning rod group, who’ve developed a telepathic level of musical communication accompanying their leader on a whopping 275 dates a year.

The disc’s biggest surprise, besides its unfiltered hard-core blues sound, is Mitchhart’s interpretation of the Beatles’ “Come Together.” Using the cigar box, he sidesteps the tune’s famous riff and reinvents the song as a Delta blues that’s true to his own roots and the sprit of the original recording.

“We played ‘Come Together’ on stage one night, just messing around, and the cigar box was so nasty and rocking that I knew I had to record it,” Mitchhart recalls.

The words “nasty,” “dirty,” “raw,” “rocking,” “honest,” “immediate” and “gritty” pop up frequently as Mitchhart talks about his new disc. To capture all of that, he cut most of its tracks live with his band to actual two-inch recording tape and then played just a handful of guitar overdubs. And he chose to record at Nashville’s Fry Pharmacy, a dusty studio with crumbling cement walls on the city’s north side that’s known for its juke-joint vibe and impeccable analog sound.

“Until now, everything I’ve done has been a lot more R&B flavored, with horns and layered backing vocals,” Mitchhart explains. “This time I wanted to be more naked and rootsy — less slick. In general I want to strip down my life right now and simplify things. And I want to do the same with my music.”

Mitchhart’s musical journey began in his native Cincinnati, Ohio, in a home where jazz guitar masters like Wes Montgomery and Johnny Smith were played on the stereo. Therefore it was natural that he gravitated to the six-string. As a child he saw the outrageous Little Richard on a TV show and was captivated by his showmanship. Little Richard looked and acted differently than anybody he had ever been exposed to. Today, Mitchhart has created his own brand of showmanship that brings audiences back again and again.

“I heard Springsteen, Zeppelin and Pink Floyd, but that stuff never moved me,” he recounts. “When I saw Bobby ‘Blue’ Bland and B.B. King, I knew what I wanted to do. Since then, my playing’s just gotten more focused and aggressive with time.”

Another serious inspiration was Cincinnati guitarist and singer Frank Hedges, a musical preacher whose sons were also in Mitchhart’s first band. “He played guitar in a strange, almost drum like style, which taught me to concentrate on the groove.”

Mitchhart has always been a bandleader. He developed his sound and stagecraft at the helm of four groups in Cincinnati — climbing the pinnacle of the city’s blues scene. He also began his recording career there, with 1993’s Blues Transfusion. Since then he’s made a dozen more albums, culminating until now in 2009’s critically heralded Grown **** Man and 2010’s Live From B.B. King’s. By the early ’90s he was the top blues act in Cincinnati. But when he played his first gigs in Nashville 18 years ago, he knew he’d found his musical home.

“The very first time I came to Nashville I sold 24 CDs off the bandstand and the audience was amazing,” Mitchhart recalls. “They were alive!” In short order he was offered the house band slot at Printers Alley’s famed Bourbon Street Blues and Boogie Bar.

“Very quickly, because there are so many tourists in Nashville, I realized I was seeing different people in the audience from all over the world every single night, and because this is Music City, they were really coming to listen,” he continues. “The Stacy Mitchhart Band has become known as one of the top live acts in Nashville because our sound is different and we bring a lot of energy to the stage.”

Nearly two decades later, that hasn’t changed. Mitchhart’s name is still synonymous with “blues” in the most rapidly growing city along the Cumberland River and he’s still playing 200 of his annual dates without leaving home. Thanks to the international following he’s largely built in Nashville at Bourbon Street Blues and Boogie Bar, Mitchhart has also performed in eight other countries.

“I’ve played everything from 50,000 seat, sold-out arenas to 5,000-to-15,000 attendance blues festivals to 1,500-seat theaters to 250-seat clubs to a 40-seat grocery store to backyard barbecues and weddings to corporate parties,” he relates. “The bottom line is that every gig is important to the people that booked you and the audience always deserves your best.

“The truth is,” Mitchhart continues, “I’m more comfortable onstage entertaining than I am in my own living room. I've spent my whole life there. And I feel like the stripped down approach of this new album lets other people get inside my music almost as deep as I do every night when I’m on stage.”