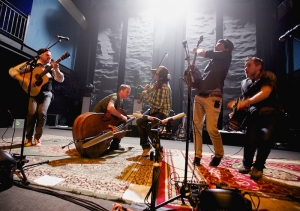 Stand for those things in which you truly, passionately
believe to the depth of your core: the integrity of your
work, the way you choose to do business, the people
with whom you surround yourself. How and where you
live your life.

A bit of a young person’s boast, that.

Harder to live up to when the compromises of career and adulthood come calling. Which makes The Infamous
Stringdusters’ insistence on living out those hard choices — and taking control of their own business — all the more remarkable.

As is the constant, relentless, revelatory evolution of their music.
Pick-ups, in-ear monitors, lighting effects. Start there, for
this is an acoustic band, right? Their live show isn’t a concert, it’s a performance, their music flirting constantly with
risk and reward, the grip of the moment taking them way
beyond the barriers of bluegrass, way out of that safe harbor where they began and into the deep waters of inspiration and innovation.

And they’re only beginning to grapple with the possibilities of all this freedom.

High Country, The Stringdusters have taken to calling that music, and it fits. “The High Country,” says banjo virtuoso Chris Pandolfi, winding his more complicated, carefully reasoned thought to a close, “is a beautiful, inspiring spot, wherever it may be.”
Yes, exactly. High Country is also the name of the record
label created by The Infamous Stringdusters, and the
centering spirit behind everything they do.

Seven years ago the band’s first incarnation came together
in one of the doorway jam sessions, which are the hallmark
of the International Bluegrass Music Association’s annual convention. Their debut, Fork In The Road, tied with J.D. Crowe’s release for IBMA Album of The Year. Now, banjo player J.D. Crowe is a bluegrass legend, and in the insular world of bluegrass legends don’t tie with newcomers. The Stringdusters also won awards for Song of the Year and IBMA’s Emerging Artist of the Year. Those are heavy honors if you play bluegrass. Heavy honors. Their third album, Things That Fly, produced a Grammy nomination for Best Country Instrumental.

Stand together, for these Stringdusters are gifted musicians, knit together: Travis Book (bass), Andy Falco (guitar), Jeremy Garrett (fiddle), Andy Hall (dobro), and Chris Pandolfi (banjo). Separately they can play, and play with anybody; together they have seasoned into a formidable, groundbreaking live act. Which is hard to do in
these sated times.

“I think the beauty of what’s going on here is that the hard part is over,” Pandolfi says. “I think we all have the universal feeling that
we will never find a playing situation that will be anything like this, even close to as satisfactory. And the beautiful thing is that when we came together it was a musical attraction. We’re five very different guys in the band, but there’s just such camaraderie, and that, above all else, is the thing that makes the music.”

They’ve been working up to this attack for a couple years now, but the key seems to have been recording their newest album, Silver Sky, with Billy Hume at the controls.

True enough Hume started out on mandolin, but he’s best known for working with hip hop acts like Ludacris, and Nas. “He brings this new vision of how the music can sound,” Pandolfi explains. “And that informs the way that we perform in the studio, it informs the way the music comes together.”

“He’d never miked a dobro before,” Andy Hall says, “and we wanted that.” Wait. That doesn’t mean they’re crafting arcane, challenging music, fit only for critics and pickers who can keep up with them. Not at all. They’re writing songs about the life they have embraced, simple as that.

“The type of people who listen to the music that we play, and are coming to the shows, are also people who go on epic hikes, or ski, or ride mountain bikes, or get out and
experience life from all angles,” says fiddler Jeremy Garrett. “The new song on our latest record called ‘Night On The River’ has been going out to a lot of people. Rafters
come up after the show to talk about it. My sister, she loves to go catfishing, sits on the banks of the river, singing that song every time she drives out to fish. The music sort of sets up the background for your life.

Stand at the crossroads with The Infamous Stringdusters, for they are not a bluegrass band. Well, of course they are. In part; they play bluegrass instruments, and can certainly hold a bluegrass audience. But The Stringdusters are heirs to the transgressive tradition of bluegrass which links them to the Earl Scruggs Revue, New Grass Revival, Hot Rise, Nickel Creek, and Leftover Salmon. They are also heirs to the broader cultural tradition of rock ‘n ‘roll. Which means, depending upon which band member you speak with, nods to Black Sabbath and the Grateful Dead, The Band and U2.

The point here is that in a wireless world nobody comes to music, even music as conservative as bluegrass, in isolation. Especially The Stringdusters, who came to bluegrass late and almost by accident. Andy Hall started at the Berklee School of Music as another shredding guitarist from upstate New York. A hand injury led him to the
dobro, and the dobro led him to bluegrass. In fact, only fiddler Jeremy Garrett has a formal bluegrass pedigree, and it’s from Idaho, not Appalachia. “I remember listening
to Flatt & Scruggs, because my dad was a bluegrass musician,” Garrett says. “But at the same time I was listening to Guns N’ Roses and U2. And those are, for me, equally important influences.”

And those influences have begun to seep into The Stringdusters’ music: a phrase here, a cover there, a quotation or a sound or just the cheek to try all of those things at once.

Stand for something. The Infamous Stringdusters stand for the notion that, important though their music is, it’s only part of a full life. And so most of them have decamped from Nashville, where the best bluegrass players can be gobbled down the maw of session work and songwriting appointments, and settled in Charlottesville, Virginia, the musical oasis pioneered by the Dave Matthews Band.

They have returned the love, hosting The Festy Experience, a weekend festival (the third is scheduled for October 5-7, 2012) in Nelson County, VA. “We try to create that intersection between lifestyle and music,” Pandolfi says. “You get a 5k run, you’ve got a mountain bike race, you’ve got a rock climbing wall, lots of yoga, hikes. Lots of sustainable food operations and craft beer vendors. And just a general sort of overriding acknowledgement that these things are important and they make for a great quality experience over the longterm. It’s about more than just trying to usher as many people in as possible.” Between sets and soundchecks band members will participate in some of those events, and, if Pandolfi gets his wish, he’ll have a chance to do some fly fishing in the bargain.

Even Garrett’s father is beginning to understand. “I invited him to The Festy last year, and he hung out all week, helped me with the gospel set on Sunday, and just had a
blast. That’s kind of the epitome of us, that’s the culmination of all our efforts, at The Festy. He was able to see our crowd react to us, and how many people were there,
so I think he got over some concerns that he might have had about the actual music. But I think he’d still prefer to hear Flatt & Scruggs.”

Stand, and wear comfortable shoes (or no shoes at all).
Because nobody sits at a Stringdusters show.