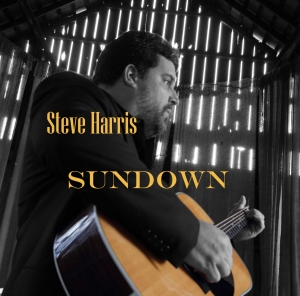 This album is a collection of tunes that I played and sang as a young lad. The songs were chosen for the personal sentiment they each hold for me, without commercial regard. Without controversy, this album comes from my heart!

"Sundown" is a Mosie Lister tune that my dad played in our home when I was a young lad. The Chuck Wagon Gang had a vinyl recording of it out at the time, and he would play it on our Sears and Roebuck floor model stereo, all-the-while belting out a heartfelt (woefully out-of-tune) accompaniment.

My AWESOME supporting cast on this album is:

Full Album is set to be released April 20th!

BIO:
Steve Harris grew up in a family that loved bluegrass music. At age 14, his dad purchased two guitars, a mandolin, a dobro, a bass, and a banjo for his five children. Multiple configurations ensued that ultimately resulted in Steve playing guitar, dobro and banjo in “The Harris Family Band.” Accompanied by their mother Beverly, the band played mostly gospel bluegrass and performed for several years in various churches and other gatherings. For several years, Steve became busy with this professional career and stopped playing. In 2007, he was invited to Gettysburg Bluegrass Festival and a fire was rekindled. Steve dug out the banjo and guitar and started playing and writing music again. After a couple of years regaining lost skills and playing brief stints with other bands, he formed Circa Blue in July 2010. Steve plays guitar and banjo on "Sundown" and sings lead and harmony vocals.
11
What's This
Advertisement