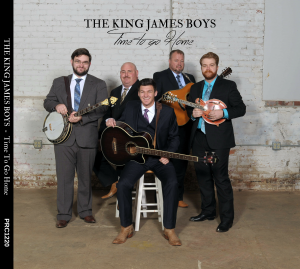 The King James Boys are a Gospel, bluegrass band that blends Southern Gospel harmonies with modern bluegrass sounds. Founded in 1994, the group started solely to sing at their church with no intentions of traveling. A few years later, after much encouragement and prayer, they were led to pursue ministering and singing abroad. Now after many years and a few personnel changes, The King James Boys are still doing what they started out doing, sharing the Gospel with others through music!

The King James Boys achieved great success with their release, THE LITTLE END OF SOMETHING BIG, receiving escalated airplay on gospel and Christian radio and charting with multiple tracks on the Singing Gospel News Music Charts in 2017. With this fantastic album and two decades of touring experience behind their original members, they are receiving some well deserved notice and opportunities.

The boys soon partnered with the acclaimed agency, Wilson Pickins Promotions, and since beginning their journey together, have been getting very busy booking more mainstream bluegrass festivals as word gets out about their energetic, uptempo Southern Gospel stage show and musicianship. They have also showcased at both SPBGMA and IBMA in 2017, as well as received SPBGMA nominations in 2018. There seemed to be no stopping them now.

In October 2017, The King James Boys took to the GREAT AMERICAN BLUEGRASS STAGE, performing staging production for Great American Bluegrass TV in Charlotte, NC, an opportunity that they are very excited about. This popular PBS based show is now airing nationally across America.

One such opportunity came in 2018 when Pinecastle Records signed the band to their label. This has been a dream come true for The King James Boys, and they are so thrilled to be releasing TIME TO GO HOME, their debut album with Pinecastle in September.

The King James Boys were also nominated this year for the coveted Diamond Award. Things just could not be going any better.

The band works very hard to spread the good Word, travels and performs extensively, averaging over 175 dates a year, and has established a broad, and very dedicated fan base across the country.

We hope you enjoy, TIME TO GO HOME on Pinecastle Records and look forward to seeing you on the road very soon!