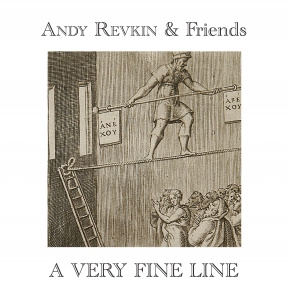 This is the first CD from Andy Revkin, who is best known as a prize-winning New York Times journalist and author but has been a performing songwriter and Pete Seeger sideman for two decades. Full bio here: http://j.mp/revkinmusic

The album draws on the talents of many of Revkin's musical friends, including Dar Williams, the mandolin wizard Mike Marshall, the virtuoso fiddler Bruce Molsky and trumpet innovator Ben Neill.

Brian Robbins hailed the CD as a "tasty mix of roots goulash."
j.mp/vflreviewrelix

What we have here is a tasty mix of roots goulash. Revkin and company never sound like anyone ‘cept themselves, but the vibes they generate may put you in mind of some other makers of marrow music. The left-arm-out-the-window-with-your-heart-on-the-sleeve highway twang of “Grandpa’s Cadillac” (wicked guitar and pedal steel by Joe Johnson and Art Labriola, respectively) and the smart/smart-**** lyrics and low-gear chug of “Liberated Carbon” feel like some good ol’ John Hiatt. The can’t-help-but-sing-along “Bills Bills Bills” could be vintage Commander Cody, with Mark Murphy’s whumping upright bass acting as both carburetor and drive shaft. Bruce Molsky’s fiddle and Murphy’s ominous bass (along with the lightest of percussion from Ken Veltz) ease Revkin’s “Black Bird” into a Railroad Earth-style folk-gothic place, while “Breakneck Ridge”’s swing from up-tempo bounce to minor-chorded simmer might put you in mind of RRE’s Black Bear Sessions. And “Blame It On Biology” could’ve been recorded in a cool and goofy-grinning place where Dan Hicks hangs out with the Tijuana Brass.But those are just passing flashes – at the same time, those tunes are just as original as Revkin’s “Arlington” (a quick-but-straight-to-the-heart lesson in the history and uncertain future of our nation’s cemetery, featuring guest vocals by Dar Williams); the beer-and-penny-whistle soul-warmer “Between the River and the Rails”; and the title song’s ponderings of life’s quirks, victories, and near-misses (or hits). An amazing cast of friends is woven throughout the album, managing to pull off the neat feat of making their own unique contributions while maintaining sonic continuity. Revkin’s the constant for A Very Fine Line ’s ten tracks (along with co-producer Joe Johnson) and it feels as if he let friendship and mutual respect be the single biggest guiding force for his deep bench of talent.
5
What's This
Advertisement