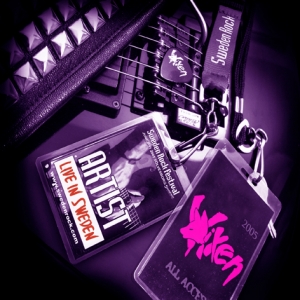 Jan Kuehnemund formed the band in Minnesota at the beginning of the 80’s, relocating to LA, and recruiting the line up that recorded their 2 studio albums, the debut album, “Vixen” in 1988 and “Rev It Up” in 1990. Unfortunately the band called it a day in 1991, leaving a legacy of only 2 albums.

In 2001, Jan reunited three of the former Vixen members to participate in the Voices of Metal tour, featuring Vince Neil of Motley Crue. Due to various difficulties, the band split mid way through the shows, and Jan faced a difficult choice – recruit new members and continue, or give up Vixen forever. She decided to do the former, and through hectic auditions, recommendations and rehearsals was able to continue the Voices of Metal tour with the new line up of Jenna Sanz-Agero (vocals), Lynn Louise Lowrey (Bass) and Kat Kraft (drums). The chemistry was obvious and this line up continues to the present day (and beyond!).

The band came off the tour, with a renewed vigour – Vixen would live again! They began writing and recording, which culminated in Vixen’s 2006 studio album “Live & Learn”. However, this album is called “Live in Sweden” and that’s the one we should be talking about!

In 2005, Vixen went back out on the road, this time in Europe. A short stint in the UK kicked off the tour (with their friends Girlschool as special guests). This lead to an appearance headlining the Sweden stage at the Sweden Rock Festival, coincidentally with Vince Neil, once more fronting Motley Crue, headlining the Festival stage. The show was a great success, and was recorded and filmed for posterity. The result…this album, and a forthcoming DVD. Amazingly, this is Vixen’s first ever live album, and showcases the band as a powerhouse rock act.

So, for the first time, you can hear the classic hits, as well as new material, all performed by the band that is currently going from strength to strength. And looking forward to what is still to come….