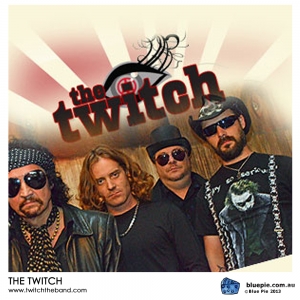 A characteristic, mannerism, or appearance of a person, either subtle or overt, which implies unique, eccentric, creative, adventurous or unconventional thinking.

THE TWITCH ARE PERFORMING AT THE INDIE ENTERTAINMENT SUMMIT !
23 MARCH 2013 - Canadian rockers ‘The Twitch’ are not only invited to attend the ‘Indie Entertainment Summit,’ they are honored to play a set during the annual bash!

THE TWITCH KICK-START FEB WITH BACK-TO-BACK SHOWS WILL RADIO LOVE GROWS !
7 FEBRUARY 2013 - To kick off February, The Twitch has just played two killer shows back to back.