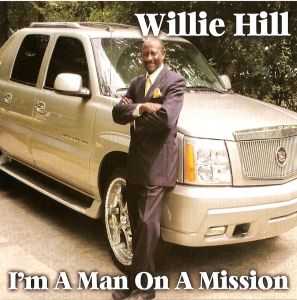 
Willie Hill, the consummate Southern Entertainer…
With performances along side of B.B. King, Bobby Blue Bland, Aretha Franklin and Al Green (plus many more legendary artists) there is no argument that Willie Hill with his deep soulful voice and style electrifies audiences everywhere he has been established as one of the very best blues performers in the south, he is truly a sight to behold.

Starting at an early age in Albany, Georgia, Hill’s love of music was influenced mostly by his father Homer Hill, a known gospel pianist/vocalist AND the 1950’s WLAC Memphis Tennessee AM radio shows. Hill’s career started during the mid 60’s when he landed a three year tour through Europe with the Sounds of Soul where they performed with Aretha Frankin, Janis Joplin, Jimi Hendrix and many more.
Hill’s first recordings were recorded at James Brown’s King Studios located in Macon, Georgia and soon after started his MGM career – Sounds of Memphis where he worked with William Bell (STAXS Records).
From this point Hill was in working contact with artists such as Isaac Hayes, Steve Cropper, Booker-T & MG’s and the list goes on. During 1973 – 1977 Hill co-founded and produced K.C. and the Sunshine Band and later ventured out with soul singer Anthony Fontaine and formed Willie and Anthony soul duet. Together Willie and Anthony released three albums, ‘Grooving on Sunday Afternoon’ ‘Selfish Lover’ & ‘In a Mellow Mood’ (Blues and Soul Magazine gave their highest 5 star rating). More recently, Hill has been heavily touring the country with acts including Theodis Ealey (The Stand Up In It Man), El Willie, Sir Charles Jones and more.