Burrito Deluxe - Disciples Of The Truth 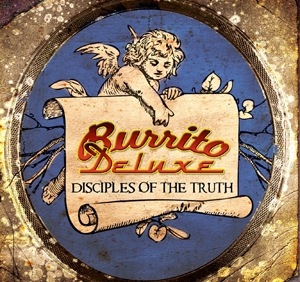 From out of the past comes the fresh but familiar sound of Burrito Deluxe, created from the signature playing of the late "Sneaky" Pete Kleinow, a pedal steel guitar legend, and co-founder of the Flying Burrito Brothers with Gram Parsons, Chris Hillman and Chris Ethridge. Their California-style country rock influenced such later groups as The Eagles, Pure Praire League, Poco, and now Burrito Deluxe.

The core of this new band began in Nashville in the year 2000 with "Sneaky" Pete Kleinow and Carlton Moody. Kleinow christened the band Burrito Deluxe, taking the name from the title of The Flying Burrito Brothers' 1970 album. Sadly, "Sneaky" passed away on January 6, 2007, but not before he played on the latest Burrito Deluxe CD, Disciples of the Truth. "Sneaky" also played on their two critically acclaimed albums: Georgia Peach and The Whole Enchilada.

Carlton Moody and Walter Egan combine their amazing musical and vocal talents to create the magical sound at the heart of Burrito Deluxe. Moody, of the multiple Grammy nominated Moody Brothers is featured on guitars, mandolin, and lead vocals. He along with "Sneaky" Pete co-founded Burrito Deluxe. Completing the core of Burrito Deluxe is award winning singer/songwriter Walter Egan, widely known for his 1978 classic smash, "Magnet and Steel." Along the way Burrito Deluxe is known for featuring an impressive array of artists including, Garth Hudson of the Band, and the late Richard Bell of Janis Joplin. Their combined resumes read like a "Who's Who" of popular music.

One listen to Burrito Deluxe proves that these musical trailblazers are still finding inspiration and new directions in the sound they helped create.