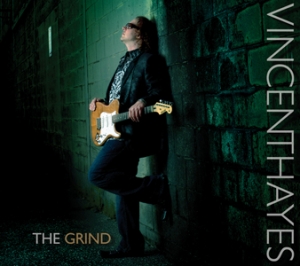 John Sinkevics, Local Spins/Grand Rapids Revue
Hayes plays from the heart, wherever that might take him. While there are blues hues to satiate longtime fans, Hayes' writing and sincere delivery straddle rock, funk, blues and more with a rootsy sort of charm that grows audiences.

John Luttrell, Full-time Blues Radio
You talk about the reputation this program has developed over the years as THEE program to hear tomorrow's legends today, with the quality of blues that this young man is playing, he is quickly establishing himself as one to watch. I predict there won't be a sophomore slump with this new CD.

Pat St. John, Host at Sirius/XM Ch 70
Your new disc knocks me out, start to finish!

BB King's Bluesville on Sirius/XM
Reclamation made it to #4 as Pick to Click on Bill Wax's weekly countdown, and is a favorite of legendary radio jock Pat St. John.

Living Blues
Reclamation spent two consecutive months on the National Living Blues Top 25 Radio Chart (June/July 2010). One of only a handful of independent releases to make the chart in 2010.

Review The Blues, the Netherlands
This is a CD that you must have in your collection!"

Pat St. John, B.B. King’s Bluesville, Sirius/XM Ch. 74
"I'm digging these tunes of yours! Everything I've heard from it is a winner. It's a smoker!"

Greg Johnson, Cascade Blues Association
Every year there seems to be at least one great guitar album that comes out and just slaps me full in the face and makes me take notice. This year it’s the Vincent Hayes Project. Reclamation just may be one of the most enjoyable albums I have heard all year long.

Gary von Tersch, Big City Rhythm & Blues
“Inspired, persuasively pensive guitar work that might even cause Clapton to raise an eyebrow in appreciation. Two thumbs up!”

John Lutrell, Fulltime Blues
“(there is) a realism to the band that you soon learn applies to everything that they do. The lyrics aren't forced, and neither is the playing. The music is natural.”