Duncan Street - Baptized By The Blues 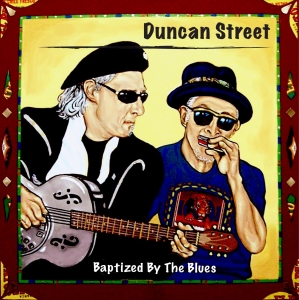 
The 15 South Records release features a bluesy acoustic setting for the duo of D.L. Duncan & Stan Street.
Released in April of 2014, this album has received airplay worldwide and went to #1 on the Blues Debut Chart and to #2 on The Tennessee Roots Music Chart ( behind Johnny Cash no less).

DL Duncan wrote 8 of the songs on the album and the reviews have been stellar.
The album is a spirited collaboration with artist Stan Street from Clarksdale, MS. Recorded very live in Lafayette, Louisiana, this new collection of upbeat country blues songs feature Duncan on dobro, national and acoustic guitar.. much of it in open delta tunings.

The song " Watermelon , Barbecue & Beer" has been a staple in the duo's live shows.