Dewey & Leslie Brown - Under The Mountain 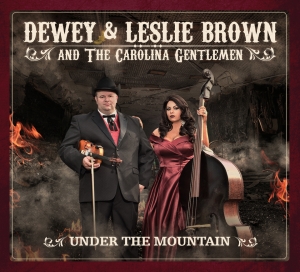 
About Under The Mountain :
. We have been so blessed to have such amazing musicians in our band recording on this album, we are so excited to share it with you! 12 out of 14 songs on this album are original written by Leslie Brown. We hope everyone enjoys listening to it as much as we enjoyed recording it.. i]-Dewey & Leslie Brown and The Carolina Gentlemen

About Dewey & Leslie Brown and The Carolina Gentlemen:
Dewey and Leslie Brown have been married since 2007 and their life has been built around Faith, Family and Bluegrass music! Dewey played fiddle as a Clinch Mountain Boy for Dr. Ralph Stanley for 11 years, until Dr. Stanley's death in 2016. He has played the Grand Ole Opry numerous times, played for The Queen of England, Carnegie Hall and many other well-known events in his career. He has recorded on Grammy nominated albums and has now joined forces with his wife Leslie to start touring again. Leslie was raised in the Appalachian Mountains, in the coal mining town of Vansant, Virginia. She was raised by her grandparents and bluegrass music has always been a mainstay in her household. Her upbringing in the Appalachian Mountains plays a major role in her song writing, playing and singing... she is the most authentic mountain girl you will ever meet and is an authentic Coal Miners Daughter, as well! Leslie has written 11 out of 13 songs on their upcoming album “Under The Mountain”. The other members in the band include Brandon Henson, of Charlotte NC, Tim Spence of Coalwood, WV and Kendall Gales of Liberty, NC.