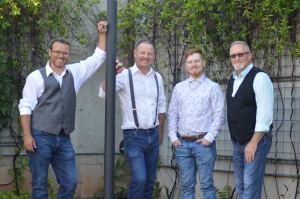 Branded Bluegrass is a talented band from Kokomo Indiana that brings a lot of energy to their shows and has been crowd pleasers wherever they go! They have been around for years, but have regrouped and rekindled the fire to perform and spread great bluegrass music throughout. Most of the members have played in or with other bands such as Jimmy Martin, Marty Raybon, Doyle Lawson, James Monroe, IIIrd Tyme Out, Mac Weisman to name a few and many other local acts as well. They love all bluegrassers, but are inspired by the traditionalist like Flatt and Scruggs, Bill Monroe, Jimmy Martin, Larry Sparks as well as new acts like Blue Highway, New Found Road, Lonesome River Band and many others.

The band’s lineup consists of Derek Dillman on banjo. He was Jimmy Martin’s last banjo player and is one of the best musicians around. Albert Swain on fiddle, who is an 8 time Indiana state fiddle Champion and 2 time Kentucky fiddle Champion! Larry Norfleet providing a powerful rhythm on guitar. Jesse Norfleet on dobro with some lonesome fills and exciting leads. Tristen Norfleet on mandolin with some great mandolin chops and Monroe like leads. Mike Martin drives the boys on doghouse bass and sometimes plays the mountain dulcimer. During shows it isn’t uncommon for the guys to show off their talents, often switching up instruments without missing a beat. The boys are talented vocally as well! You won’t get bored listening to one guy sing all the time as they switch up and sing different parts, while maintaining great harmonies.

Branded Bluegrass released their debut CD, Simple Days, in 2011. They recorded it the way it was done years ago. No tricks or tracks. They gathered in one room and what was played is what you got. They wanted that "live" feeling and didn't fail to deliver. They put Randy Jones, from Lonesome River Band, to the test as he recorded and produced the whole project. It contains 14 tracks and features 3 really good originals in, Simple Days, Guitar Pickin' Blues and Red Kentucky Clay. It did well and has been played at stations across the US as well as other countries.

Their latest release, Most Welcome, was recorded in 2015 and it released in May of 2016. This CD looks to be the one to help launch them to another level! It was recorded and produced by Clay Hess and contains 5 originals in, Ramblin' Boy Blues, Come Back Little Darlin', Most Welcome, She Is The Best and Judgment Day. Clay says that "Judgment Day is really good and the Gem of the CD." They are in process of putting another project together, writing more originals and gathering new material for a possible all gospel CD.

Jack Davis of Central Indiana Bluegrass Association stated, “It’s always good to see Branded Bluegrass play! Their debut CD, Simple Days is one of the best out! In my opinion, only Audi Blaylock’s new release may be better.”Bob Auth and Duane Davis of Winding Creek Bluegrass Festival stated, “We at Winding Creek Bluegrass Festival, in Russiaville, IN, consider Branded Bluegrass our house band as we will ask them to come back each year. When these boys take the stage they bring a lot of energy and are crowd pleasers. At our 2012 festival they played 17 hard driving bluegrass songs in one of their sets; the crowd gave them a standing ovation and demanded an encore. As festival owners and coordinators we couldn't be happier to have a local band with this level of talent to be considered our house band. If you are looking for a solid Bluegrass band for a festival we certainly recommend Branded Bluegrass!”

Be sure to follow us on Facebook and Twitter. We would love to be a part of a show near you! Help get the word out about Branded Bluegrass so we can help others "Get Branded!"