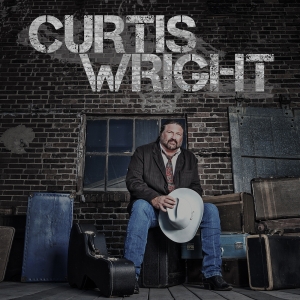 Voxhall Records announces the release of Curtis Wright's self titled album. The digital release hits iTunes and all digital outlets today, Friday April 22nd.
The single,"Going Through Carolina", written by Wright & Jerry Salley, has spent time in the Top Ten on Bluegrass Today's weekly chart at the #7 & #5 spots and currently sits at #15 on Bluegrass Today's Monthly Chart. The full project includes songs written by the likes of Chris Stapleton, Ronnie Bowman, Shawn Camp, Brandon Rickman & Jerry Salley. The album was recorded at Hilltop Studio in Nashville and produced by Jimmy Metts.

Curtis Wright’s whiskey-seasoned voice and wistful, heartland storytelling never let go on this ageless, long-awaited collection. His decades of work as a songwriter and backup singer yield an album full of powerful, evocative tunes that make you fall in love with the country they sing about: the maze of roads, taverns, and churches of the American Heartland. An honest sense of yearning fuels the entire album. On the first hit single, “Going Through Carolina” - an easy going on-the-road outting - Wright’s longing looks to the past, but it doesn’t stay there long. The poignant back porch hymn “I Will Someday,” points that same nagging hunger at Wright’s most sacred hope for the future: a home with his God.
But as heartfelt and personal as some of these songs are, Wright doesn’t keep his hand on his heart the whole time. Some tunes he delivers with a hell of a grin. “Tunnel Tunnel,” with it’s old- as-the-hills sound, is about a hard-fought prison break attempt, and the bluesy “Dixie Chicken” is a classic young man’s tale of love and mischief.
Throughout the album, Wright’s songs have the power to take you places: from your mother’s prayerful bedside when you were a child to a lonesome night of drinks in a just-emptied house. But where they take you isn’t the thing. The thing is that wherever they wander, they have a knack for telling the truth.


Curtis Wright has a voice that permeates the soul. Oh yes, there's a heart in there with lots to tell. Thank goodness we have his songs! You still send me when you sing. Keep it up Buddy!
~ Claire Lynch

" I'm a #1 fan of Curtis Wright - listening to his amazing voice, and his special writing style. I'm excited to hear his new project and so honored to sing on it"
~Rhonda Vincent

" I first heard of Curtis Wright immediately after joining the Lonesome River Band in 1989. Fortunately for me, it wasn't long thereafter that I had the privilege of hearing Curtis' music for the first time. I could tell by the tone in his voice that the songs he was singing were all coming straight from the soul. From that moment on, and still to this day... let's just say that I became, and will always be one of Curtis' biggest fans"
~Ronnie Bowman

With Curtis Wright, we have been close personal good fishin' buddies and for the last 35 years we've been pickin' and singin' Bluegrass music together. I can say this boy puts his heart and soul into Bluegrass-He understands it and what more can I say, you're gonna love every heart felt note !! Ladies and Gentlemen, say hello to Curtis Wright. Let it go, boys!!!
~Dale and Don Wayne Reno


Voxhall Records - February 2016
Here is the first single off the upcoming album from Voxhall Records latest signing, Curtis Wright. The single, “Going Through Carolina”, was written by Curtis Wright & Jerry Salley. The song was inspired by Curtis’ experiences, a few years back, while driving an 18 wheeler for a living. The project was recorded at Hilltop Studios in Nashville, TN and produced by Jimmy Metts. The full project will be released in April 2016.
22
What's This
Advertisement