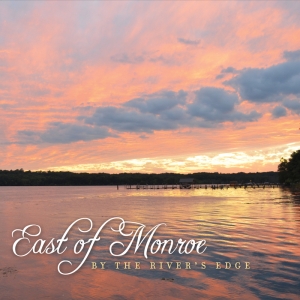 By the River's Edge- album announcement
East Of Monroe is a new bluegrass group based in Virginia and Maryland, made up of experienced musicians who have gotten together to focus on original music written primarily within the group.

Their debut album, By The River’s Edge, has just been released and the band has selected a focus track to present to radio. It’s called A New Song, and was written by Richard Ward, Emily Timberlake, Jackie Frost and Billy Budd. Frost takes the lead vocal on this one.

The album is available now wherever bluegrass music is sold online, including the band web site, and is offered to radio programmers via Airplay Direct.

By the River's Edge- album review
"East Of Monroe’s debut album titled By The River’s Edge has been six years in the making. The recording represents two different lineups, but sounds surprisingly cohesive reflecting the excellent songwriting of current members Gary Alan Ferguson and Jackie Frost and former member Emily Timberlake. The album fits comfortably in the contemporary bluegrass genre, using the standard lineup of guitar, banjo, mandolin, fiddle, resophonic guitar (Dobro), and bass, but stretching song forms outside of the traditional three or four chords. This often gives the songs an acoustic folk country feel, an instant antidote to the slick country pop heard on the radio.

The earlier lineup featuring Timberlake on vocals and the late Dave Giegerich on Dobro are heard on the Timberlake originals Careless Thing, Goodbye Letter, and Lyin’ Awake At Night; a Patty Griffin cover - When It Don’t Come Easy and a swing tune, Undecided. Careless Thing has a beautiful aching lead vocal by Timberlake tastefully backed by Giegerich’s dobro. Lyin’ Awake At Night shows the wonderful blend of Timberlake’s lead vocals with harmonies by guitarist Jackie Frost and banjo player Richard Ward. Frost is the featured lead vocal on When It Don’t Come Easy which brings to mind the 70s west coast country rock of Linda Ronstadt. The swing standard Undecided (which was made famous by both Ella Fitzgerald and the The Ames Brothers with Les Brown’s orchestra) has Frost’s playful vocals with a bouncy swing feel, accented by Giegerich’s Dobro and Ferguson’s gypsy influenced guitar.

Sadly Giegerich passed away shortly after the first recording sessions. It was a hard loss for the band personally and musically and By The River’s Edge is dedicated to Giegerich’s memory. The core of Gary Alan Ferguson on guitar, bassist Billy Budd, Richard Ward, and Jackie Frost added Lisa Kay Howard on mandolin and Wally Hughes on fiddle and Dobro who are heard on the later recordings here. Ferguson’s wide variety of song styles can be heard on the folky title song and One Letter which also has some tasty fiddle playing by Hughes. Ferguson takes a more traditional bluegrass approach on No Me And You which has a nice round of instrumental breaks with Hughes on fiddle, Ward on banjo, Howard on mandolin, and Ferguson on guitar. Too Many Nights also has a traditional feel and wouldn’t sound out of place on a Ralph Stanley album. By The River’s Edge is a very enjoyable album in a style the band themselves describe as Americana bluegrass. Since the recording sessions for album were completed Terry Wittenberg has replaced Richard Ward on banjo and East Of Monroe has begun playing shows to support the CD. Hopefully this is just the beginning of their musical exploration."

What people are saying about By the River's Edge...
"While reviewing some new CDs and music for The Grass You Love, I happened upon East of Monroe. Before I realized it I had listened to the entire project! Great album! Above all else, a great listening album! Highly recommended!"
-Kenneth Berrier, "The Grass You Love" on WEHC Emory, Virginia & WOPI Bristol, Tennessee

What people are saying about By the River's Edge...
"I love East of Monroe CD By the River's Edge, the music and the voices are perfect.
my favorite songs are
"Say What You Mean"
"Careless Thing"
"Goodbye Letter"
"River Wide"
"Too Many Nights"
"Undecided"