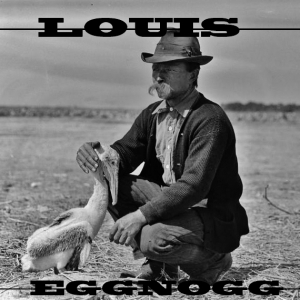 
It has been a year since Eggnogg released their acclaimed second album, Moments In Vacuum, in July of 2011. During this period of apparent dormancy, the band has been hard at work writing and recording new material for a slew of releases in the summer and fall of 2012.

On July 11, 2012, the band will release a new four-track EP entitled Louis. Following the trend set by Nogg EP(2010), which fell between the band’s debut album The Three(2009) and Moments in Vacuum(2011), Louis is a between-albums EP intended to quell fans’ appetites while the band puts the finishing touches on their third full-length album. Louis is named for estranged bassist Louis Davidson, who played with the band back when their name was GonZo, and who co-wrote the Ep’s third track “The Squid,” back in 2006. The new EP reimagines old songs from the GonZo days, recorded fresh with additional parts added. As with the Nogg EP before it, the band takes the creative liberty to deliver straight-up Rock ‘n Roll with a Noggy twist, as well as new, unexpected sounds that fit snuggly into the scheme of Eggnogg’s deeply-seeded sonic progression.

In the aftermath of the Louis EP, Eggnogg will release their third full-length album, entitled You’re All Invited. From the latter half of 2011 to the present, Eggnogg has been toiling over what will surely be their heaviest, fuzziest, and doomiest recording to date. In contrast to the Louis EP, You’re All Invited will stretch the bounds of song structure and track length to offer a listening experience that is a primordial ritual of heavy riffs, feedback, psychedelic textures, lyrical melodies, and spiritual introspection.

Eggnogg will launch a Kickstarter campaign in July to raise funds to finance the pressing of You’re All Invited on vinyl. This will mark Eggnogg’s first vinyl release, and the band is very excited to finally heed the call of the many fans who seek to have the band’s music on vinyl record. Among the rewards for Kickstarter donations will be limited-edition copies of Louis on CD, posters, t-shirts, and exclusive, autographed prints of Justin Karol’s album artwork.