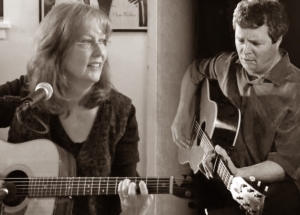 Gary Ferguson (guitar, lead vocals), a longtime resident of southeastern Pennsylvania, is a singer, songwriter, guitarist and bandleader who’s been a mainstay of the Eastern bluegrass and Americana scenes since the 1980s. In addition to his own Gary Ferguson Band, Gary has recorded or performed with such distinguished bluegrass musicians as Ronnie McCoury, Robbie McCoury, Mike Auldridge, Alan O’Bryant, Junior Barber, Ron Stewart and Jimmy Gaudreau. On his annual tours of Ireland, Ferguson has worked with musicians Mick Hanly, Charlie McGettigan, Frankie Lane, Janet Holmes and Colin Henry.

Ferguson is an acclaimed songwriter, best known for the Larry Sparks hit, “Last Day at Gettysburg,” which rose to number two on the Bluegrass Unlimited Top 30 chart and earned Ferguson nominations for the Song of the Year and Songwriter of the Year awards from the Society for the Preservation of Bluegrass Music in America. His songs have also been recorded by Cliff Waldron and Paul Adkins. He is a five-time finalist in the Chris Austin Songwriting Contest at MerleFest and the owner of Gunny Sack Music Publishing Company.

Ferguson is a prolific recording artist whose records span bluegrass, country, Americana and folk. His popular early albums include Thinkin’ Bout You, Without You and I’m Really Leaving; the most recent additions to his tasty and varied discography are Live at Podunk and Ferguson, Holmes and Henry, recorded with Irish musicians Janet Holmes and Colin Henry. Ferguson’s music has been featured on Car Talk, the hit National Public Radio program. Three of his original songs were included in the Bluegrass Unlimited “Top 200 Songs of the 1990s” list.

Ferguson has performed at some of the most prestigious venues in the U.S., including the Kennedy Center, MerleFest, Grey Fox Bluegrass Festival, the Birchmere and the Strawberry Music Festival. He has also toured in Ireland every year since 2005, appearing at De Barra’s Folk Club, Seamus Ennis Centre, Phil Murphy Weekend and other spots throughout the country. myspace.com/garyferguson

Kathy Barwick (lead guitar, resophonic guitar, Weissenborn guitar, harmony vocals), a native of Sacramento, California, has been widely hailed over the past 30 years as one of California’s most versatile acoustic musicians. Known for her work in bluegrass, Americana and traditional Irish music, Barwick is an award-winning multi-instrumentalist who’s adept on guitar, banjo, resophonic guitar (dobro), bass, lap steel guitar and mandolin. Barwick is a member of the Mike Justis Band, a folk-country-blues ensemble, and has played in such popular bands as the All Girl Boys, Nine-8ths Irish and Mountain Laurel.

Barwick’s first solo album, In My Life, was released in 2011 by FGM Music, the recording arm of Flatpicking Guitar Magazine. The genre-spanning gem has been exceptionally well received by critics and fans alike. Bluegrass

Unlimited noted approvingly that “In My Life is a deeply enjoyable coming out party for Kathy Barwick, show-casing her rich array of talents. What’s most deeply satisfying about the result is that her abilities are channeled not to dazzle the listener, but rather to serve the music.” Barwick’s other recent recordings include Out on the Ocean and West of Ireland with Nine-8ths Irish; Another Sunny Day in California with Mountain Laurel; and One Foot In with the Mike Justis Band.

In addition to her performing and recording activities, Barwick is also an internationally acclaimed music educator who has taught at Kaufman Kamp, the California Bluegrass Association’s annual music camp, the British Columbia Bluegrass Workshop and other highly regarded music camps in the U.S. and Canada. She’s also conducted educational workshops at Wintergrass in Seattle, the Cityfolk Festival in Ohio, the KVMR Celtic Festival in California, the North Texas Irish Festival and at the Perfect Pitch music store in Dublin, Ireland. Barwick also writes a monthly instructional column in Flatpicking Guitar Magazine and is one of the magazine’s most popular columnists. She recently recorded a video lesson on bluegrass cross-picking for Acoustic Guitar Magazine. www.kathybarwick.net