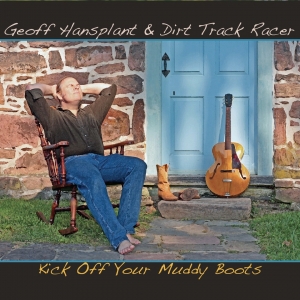 We are very pleased to report that our album, "Kick Off Your Muddy Boots," has been named Americana Album of the Month for March 2015, by The Akademia Music Awards! Our sincerest appreciation to the Akademia!

Bucket Full of Rain #2 on the RMR Rock Charts!
One of the two singles from Geoff Hansplant & Dirt Track Racer's new album, Kick Off Your Muddy Boots, has hit the charts in a big way. “Bucket Full of Rain” is #2 in the country on the Roots Music Report Rock Singles Chart for 2/21/14.

Album of the Month for Kick Off Your Muddy Boots
Dirt Track Racer wishes to extend our heartfelt thanks to Llew Garner at Radio Warrington in the UK for naming Kick Off Your Muddy Boots as his album of the month for February 2014. We are thrilled with the opportunity to have our music exposed to a wider audience on Llew's great show and with Llew's commitment to play the bulk of the songs from the album over the course of the month.

LVS Granted, Geoff Hansplant isn’t a household name yet. But, with the aid of his band Dirt Track Racer, the Philadelphia-based singer-songwriter takes traditional forms of Americana and adds delicious Latin rhythms, tricky jazz and classical flavors, narrating the ups and downs of the human condition. As expected, Hansplant is up front with his vocals and Piedmont-injected guitar, with Julie Myers adding violin, piano, organ and vocals. The result is a much-needed fresh take on the musty mountain that is Americana. Opening with the title track, an irresistible rocker, the set includes a number of worthwhile highlights. The bare-bones, primitive desires of “Delilah” mesh well with the spicy percussion that punctuates the plaintive blues grind of “Already Gone.” The true centerpiece of the set, the effervescent “Bucket Full of Rain,” delivers Americana with a funky, Stax-tinged swagger. Hansplant, like many artists before him, seems determined to detail the many moods of love. And with “Eliza Jane” and “From This Moment On,” he tackles two very different sides of that often-confounding emotion, deftly expressing the mercurial joys of the pursuit. Overall, it’s a very solid debut.

Dirt Track Racer Nominated for Tri-State Indie Music Award
12/31/13 - Just in from the Philadelphia Folksong Society. They have nominated us for the 3rd annual Tri-State Indie Music Award! Here 2014 is just on the event horizon and we're kicking off the year in fine fashion. It is an honor to be nominated and to get an early report on the music on our new album, Kick Off Your Muddy Boots. Stay Tuned!

Dirt Track Racer Supports Our Troops
12/16/13 - Just in time for Christmas, Dirt Track Racer has released the first single from their upcoming album, "Kick Off Your Muddy Boots." The single is "Home For Christmas" and proceeds from the digital sales of the song will be donated to the National Military Family Association, an A+ rated charity providing services and support to the members of our military, veterans and their families. The song is available through Itunes, CDBaby and Amazon, among others, and the band hopes to garner the assistance of Radio Programmers and DJ's across the country and around the world, to get the song and the message out to audiences everywhere.