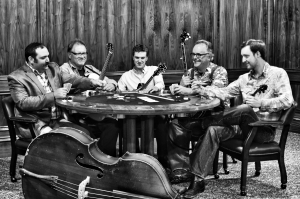 Bluegrass Unlimited Review
It’s a joy to discover a regional band that has the potential to breakout nationally. I’d say that’s true of the Chattanooga, Tennessee-based Hamilton County Ramblers. Their self-titled debut album is pretty much a total package. Confident, engaging lead vocals and resonate harmony singing combine with picking that’s solid, inventive, and soaring. Everyone plays at pretty much the same level—superb. The tone, note selection, feeling, it’s all here.

Prescription Bluegrass CD Review - The Hamilton County Ramblers - by Mark Raborn
The debut, self-titled CD by the Hamilton County Ramblers features eleven cuts with material as varied as Stephen Foster’s, Hard Times, James Taylor’s Copperline, and I Hear Ya Talkin’, penned by cowgirl, country song-writer, Cindy Walker. With that said there is still enough traditional, Bluegrass-type material to satisfy all but the most persistent and jaded Bluegrass purists.

Hamilton County Ramblers get it right

Hamilton County Ramblers is the debut, self-titled album by one of Chattanooga’s premier bluegrass ensembles, and it is a gem. With 11 tracks that run roughly 40 minutes, the band manages to cover some great old classics and some lesser-known traditional works as well.

**FOR IMMEDIATE RELEASE**
The Chattanooga based bluegrass band officially releases their self titled CD on October 11, 2015 at the Barking Legs Theater in Chattanooga.

The CD represents a combining of the talent of some of Chattanooga's finest bluegrass musicians.

Album Notes
It sometimes seems these days that new groups in bluegrass all fall into one of two camps. There are those for whom bluegrass is at most a predominant flavor in music that otherwise leans on related styles, and there are those who serve up something narrow, fixated on the mid-tempo groove and modal melodies popularly referred to as “mashing it.” You can attend a fair number of festivals and listen to a good deal of bluegrass radio today and not hear too much else.