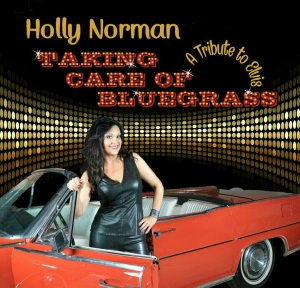 Taking Care Of Bluegrass - A Tribute To Elvis

Freedom Entertainment artist Holly Norman is releasing her sophomore Bluegrass CD and it’s fit for a king, literally. Her new CD project is a tribute to Elvis Presley. Holly has taken some of Elvis’s most beloved songs and some of his more obscure and “grassed” them up. The CD also includes an original song, Long Live The King, Holly wrote as a tribute to Elvis.

Holly has always been a huge Elvis fan. “Elvis is an original and one of the most iconic entertainers of all time. He and his music continue to transcend all genres and generations. He will always be the King, says Holly.” This project has been in the works for the past year and a half, but has been an idea Holly has had for quite awhile. “Several years ago, my sister and I were at Graceland for Elvis week. As we were standing at the gates of Graceland looking around at all the fans and listening to all the great Elvis songs, I was thinking ahead to my next CD and thought what an interesting twist it would be to take Elvis songs and put a Bluegrass sound to them. Then, it dawned on me, we could call it Taking Care of Bluegrass! Everyone knows Elvis’s famous moniker was Taking Care of Business, says Norman.”

For this project, Holly assembled some of Nashville and Bluegrass’s top musicians, including Cody Kilby, Rob Ickes, Aubrey Haynie, Glen Duncan, and Stuart Duncan. The CD also features several special guests. James Burton, Elvis’s original guitarist, is featured on resonator guitar on Kentucky Rain. Terry Blackwood & The Imperials, one of Elvis’s backing groups, join Holly singing backup on Little Cabin Home On The Hill, I’ll Remember You, and Sweet, Sweet Spirit. “It was a dream come true to work with James and Terry. They spent many concert nights on stage with the King himself and they couldn’t be any nicer or more talented, Holly says.”

The 13-song CD has something for everyone, from up-tempo to ballads, traditional to progressive, and even gospel, which Elvis loved. Listeners will be impressed and amazed at how well these Elvis songs translated to Bluegrass. The CD is already getting lots of notice and attention from both Bluegrass fans and Elvis fans alike. To purchase a CD visit www.hollynorman.com, iTunes, cdbaby, Amazon, etc. The CD will officially be released on October 14, 2016!

For more information, visit hollynorman.com and to connect with Holly, join her at www.facebook.com/hollynormanmusic.

For a behind the scenes look, check out “The Making of Taking Care of Bluegrass” video series on Holly’s YouTube channel www.youtube.com/hollynormanmusic.
13
What's This
Advertisement