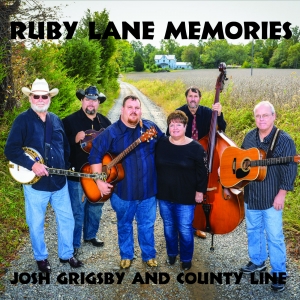 Josh Grigsby and County Line is a bluegrass band based out of the beautiful Northern Neck of Virginia. Lead singer, Josh Grigsby grew up in King George, which is the gateway to the Northern Neck. His bluegrass influences came at an early age, helping his father, who was a waterman by trade, on the water fishing, crabbing and oystering. His father, James ‘Bubby’ Grigsby, would always have bluegrass greats on the stereo such as Flat and Scruggs, and Reno and Smiley and the County Gentlemen to name a few. Bubby also loved the older country music by the likes of folks such as Jim Reeves. Josh grew to love this music as well, even as a youngster, but also was influenced by country music greats such as Vince Gill, Don Williams, and the country music icons of the 80’s and 90’s. Josh started singing by the time he was two to family and churches, and later at local establishments that offered live music and karaoke. He became a crowd favorite at Donk’s Theater in Mathews, Virginia singing county music at the venue with the house band Shades of County. Josh started going to bluegrass jams in the area and folks encouraged him to start a band, which is where Josh Grigsby and County Line began in 2013. The band became very popular on the local music scene. The most memorable moments for Josh was opening a show for legendary Alan Mills and the Lost and Found when the band was less than a year old and winning the 2014 East Coast Bluegrass Competition in Gloucester, Va. Josh is a self taught rhythm guitarist for the band as well, but his tenor voice is what draws folks to his shows. Josh Grigsby and County Line released their first CD, Changes in the Tide in 2015, which features the Title Track, which is a tribute to his father. Josh’s recent bluegrass influences are IIIrd Tyme Out and the Seldom Scene, Josh enjoys people, and is just and all around good ol’ county boy. So if you are ever at a show, make sure to shake and howdy with him.

Harmony vocalist, Crystal Grigsby, began singing with Josh at church. They both had a great love for music and spent many hours singing and playing music together, as well as writing songs. She loves adding harmonies to his beautiful tenor voice and enjoys being by his side in this musical journey as a member of Josh Grigsby and County Line.
In 2012 at a music event, Josh sang Sammy Kershaw's “You Are the Love of My Life” on stage and called Crystal up and proposed to her right then and there. They married in September 2013.
Crystal’s early influences came from her mom and aunts who sang in churches and on the radio when they were younger. Crystal began singing in local church’s with her sister in law and niece in the 1990’s adding harmonies to the group The Preston’s.
She loves all types of music, but has a special place in her heart for bluegrass because of its honest, American roots, and having a family that is from SW Virginia, home of Appalachia style music, where many bluegrass greats were born such as Ralph Stanley and Bill Harrell. Her first taste of bluegrass was Bill Harrell, who she claims as her first bluegrass ‘love’. She was hooked on the music and now finds it hard to pinpoint a favorite, although she puts IIIrd Tyme Out and Marty Raybon and Full Circle right at the top of her list. “There is so much talent and so many good songs, it really is hard to pick a favorite” she says. “You will not find any better musicians and just plain out great folks than in the circle of ‘blue’.” Crystal attributes the success of the band to God and is thankful for the opportunities He has provided JGCL over the past couple of years.

Mark Mills from Chesterfield, Virginia, provides lead guitar and vocals for JGCL. Mark started playing guitar at the age of 12 and went through country music and rock and roll before discovering Bluegrass in his late teens. He learned to play mandolin and joined JC Hale and the Blu Fescue. After a few years with JC, he became a founding member of the New Spring Grass until he joined the Richmond Fire Department in 1977. Working 24-hour shifts every other day allowed no time for a band. He had to leave the music he loved until 2000 when a former member of New Spring Grass asked him to come play with Copper Ridge. His work schedule had changed by then and playing in a band was possible. He was with Copper Ridge for over 15 years. He retired from the Richmond Fire Department in 2007 and is looking forward to making great music with Josh Grigsby and County Line and spending time with his family and four granddaughters.

Whitney Perkins from Chesterfeild, Virginia provides Resonator for JGCL. Whitney has been playing Dobro since 2010 and studied under Reso-master Pete Smith. Whitney plays a 2011 custom vintage R model beard dobro.
In 2011 she received the VFMA youth scholarship award. From 2012-2013 Whitney attended East Tennessee State University's bluegrass program.
Whitney has played with several band in the Central Virginia area and is not a stranger to many festivals and stages. The biggest influence on her style of playing is Josh Graves and Pete Smith. In Whitney's spare time she enjoys hunting, fishing, bluegrass festivals and spending time with her family.

Robert Kidd, from Mechanicsville VA plays bass for Josh Grigsby and County Line. His major musical influence were local musicians Brian Sulser, who mentored him and inspired him to play ‘better bass’. Another local musician who made a big difference in his playing was Bob Payne who worked with Bob to perfect his trade. It is evident in his playing. As a youngster, Bob would sit on his daddy’s lap and play guitar with him as he played Hank Williams songs. In 1966, he pursued his love for music, playing bass in a rock & roll band. The band ended in 1967. Bob took a hiatus from playing and did not play bass again until 2004 when his father asked him to get his old bass from under the bed at his house. Learning bass was not going to be easy him, but after a year he was hired by Flatland Bluegrass Band. He played with them for a year and a half. Afterwards, he helped form Willow Creek Band, and little later he joined Easy Street band. Robert enjoys all types of bass and also played with a 30 and 40s swing band, a Pack of Luckies for several years. Bob, along with his friend George Winn were in the documentary “Strumming up the Past: Henrico's Bluegrass Music. He attends a weekly Bluegrass jam with his friends in Goochland , which has brought much joy to his life.

Judge Parker, originally from Henry County, Georgia, now calls Short Pump, Virginia home. He provides banjo and vocals for JGCL. Judge's early musical influences were rock and roll and rockabilly and his first band experience was playing saxaphone in a high school rock band. He was introduced to the banjo in college by Wade Macey who was a math professor where Judge attended junior college. Wade had worked his way through college playing with Mac Wiseman. Judge was "blown away" with Wade's banjo work and it changed the course of his life. After school and a couple of false starts at a real job, Judge began a pursuit of music and was a professional musician from 1974 to 1983. He began his career with "Nickel Ticket" an Atlanta band after which he co founded the "Saturday Session Band", a successful local Georgia group that opened for or shared venues with such bands as the Nitty Gritty Dirt Band, Doug Kershaw, the Earl Scruggs Review, Ray Stevens & others. Saturday Session was honored to be invited to play at the National Visitors Center in Washington DC for Jimmy Carter's Presidential Inaugural ceremonies. Along with partners, the band also opened the "Blue Eagle", a music hall and tavern in Sandy Springs, Ga. Later, the "Judge Parker Band" (no connection to the current band by that name) performed briefly as the back-up band for Ben Jones (Cooter of the "Dukes of Hazard"). He was voted Atlanta's Best Banjo Player by readers of Atlanta Magazine in 1978. Judge also played "the banjo player" in the 1977 Columbia Pictures movie "The Farmer". Shortly after the birth of his son in 1982, Judge chose to leave music to pursue a career in business that would allow him more time with his new family. After a 30 year layoff, he has recently renewed his interest in music and is having "more fun than he can stand" being a part of JGCL.

A special thank you to Chris Westcott and Frankie Ballowe for sharing their talents in our release - Ruby Lane Memories.
13
What's This
Advertisement