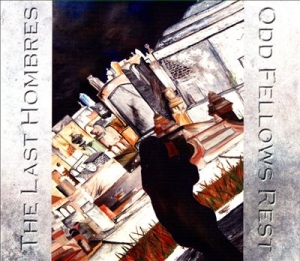 It’s unusual to kick off and close your first album in 11 years with the New Orleans funeral sound of the Hot 8 Brass Band. But little about The Last Hombres follows any sort of blueprint. The quintet released their critically acclaimed if commercially disappointing debut in 2003 with the drum chair filled by ex-Band founding member Levon Helm. That was enough to get them noticed, but Helm soon left to start his Midnight Rambles and the group splintered. Drummer Tom Ryan asked the members to reform as a benefit for a show he was producing a few years ago, which reignited a full reunion with Ryan filling the drum spot.

Despite being recorded in New York City, there’s a heavy New Orleans vibe to the sessions, emphasized by the Hot 8’s appearance on four tracks. The original three Hombres divide songwriting and singing on songs that were written over the past decade, but this band is so locked into their swamp rock groove that the project gels with surprising cohesion. Tracks such as “Unforgiven Man” sung from a defiant wild west outlaw now on death row’s point of view exude a southern sensibility that’s somewhere between Lynyrd Skynyrd at their most reflective and the Band. Elsewhere strains of country, soul and blues inform the music with touches of J.J. Cale, John Hiatt and Wet Willie taking the sounds straight down to the heart of Dixie while keeping a firm pulse on a northern beat.

There’s an almost vaudeville influence that sneaks its way into “Dreams” helped enormously by the Hot 8 Horns and the fiddle driven “Save the Farm.” But the Hombres are best when they sink into mid-tempo rocking as they do on the smirking “Mae West,” the country tinted vibe of “Gone Directly” and the majority of this long overdue follow-up.

It’s doubtful many were expecting another album from the nearly forgotten Last Hombres but now that’s it’s here, those who remember their debut can rejoice and the rest of us can discover what seems to be a new, talented outfit that seems to have emerged fully formed out of nowhere. Let’s hope the next one doesn’t take as long.