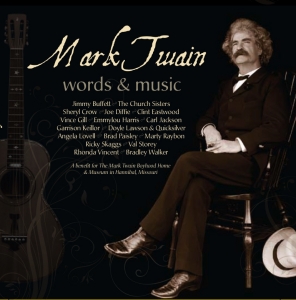 This star-studded work of Bluegrass and Americana is a BENEFIT for the Mark Twain Boyhood Home & Museum on the banks of the Mississippi River in Hannibal, Missouri.

The album, Mark Twain: Words & Music, is a double-CD telling Twain's life in spoken word and song. This benefit for the Mark Twain Boyhood Home & Museum, a non-profit organization that celebrated its 100th anniversary in May 2012, was created to commemorate the 100th anniversary of Twain's death in 2010 and the 175th anniversary of his birth. It was produced by Grammy award-winning producer Carl Jackson and released on September 21, 2011.

The CD contains 27 tracks - 14 spoken word (with musical background) and 13 songs. The CD sequentially tells the life story of Mark Twain, who was born in 1835 under Halley's Comet and died in 1910 - also under Halley's Comet. The CD was conceived by museum director Cindy Lovell who wrote the narrative and is co-executive producer with Carl Jackson. She and Jackson were childhood friends who had not seen each other in 30+ years until she contacted him to see if he would produce this project.

Several of the songs are brand new and were written especially for the project. Only one song is from Twain's era (Beautiful Dreamer, sung a cappella by Sheryl Crow). The songs were selected to compliment each story segment, which chronicles Twain's life as a boy in Missouri to his life as a riverboat pilot, journalist, family man, author, world traveler, and social commentator.

The double-CD comes with a 40-page booklet of liner notes that includes photos, song lyrics, and narrative. It is carried on Mailboat Records.

Of special note: Rob Ickes, who plays dobro on the album, was named Best Dobro Player at IBMA in Sept. 2011. Adam Steffey, who plays mandolin on the project, was named Best Mandolin Player at IBMA in Sept. 2011. Some of the harmony voices that can be heard include Joey Martin (of Joey + Rory), Cia Cherryholmes, and Sonya Isaacs. Banjo lovers: listen for Carl Jackson's earth-scorching banjo work on "Run Mississippi." His fingers are still smoking!