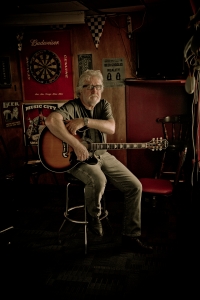 Singer-songwriter Mike Cullison is used to hearing his work defined in painterly terms; music journalists commonly pull out such metaphors when trying to describe songs. But with his new album, Barstool Monologues, it’s almost as if he’s working in the 3D style of sculptor J. Seward Johnson Jr., who turns famous Impressionist paintings into life-sized tableaux, incorporating not only the original images, but his own fanciful imaginings of what went on beyond the canvas.

Cullison takes a similar approach, weaving lives into songs, then threading them together with spoken-word narrative to create a vivid musical tableau. There’s the heartbroken lover, the fracturing couple, the other woman, the lonely imbiber ... each introduced by a bartender named Hollis, who sees and hears it all. Various singers inhabit their personas, spinning musical novellas into what Cullison likes to describe as “a honky-tonk Canterbury Tales.”

“It’s as if you walked into a place and you took a snapshot and everybody’s looking in the camera,” says the Nashville resident. “What I wanted to do was place everybody in that picture into one of the songs, either as its subject or the person singing it to somebody else.”

Cullison, an Oklahoma native who’s honed his songwriting skills with such royalty as Don Goodman (“Ol’ Red”; “Ring on Her Finger, Time on Her Hands”), Johnny Neel (the Allman Brothers) and Mike Stergis (Crosby, Stills & Nash), describes his style as “roadhouse blues and country roots-rock.” But his influences are as vast as the early rock ‘n’ roll his mom adored and the classic country his dad preferred, and he draws deeply from that well, along with other Americana styles — from Bakersfield to hybrid zyde-Cajun blues — to create a rich aural tapestry as colorful as Johnson’s art.

He considers himself a lyric writer first, however. “The story and how it is told are very important to me,” Cullison says. “Some songs come at you very quickly, but most take time. There’s still a lot of polishing to do even after the lightning bolts strike.”

Cullison’s career has taken time, too. In fact, the release party for his first album, 2004’s BAC (Big American Car), was also his retirement party after 32 years with the Bell Telephone Co. Midway through his Bell Tel years, he moved to Atlanta, “because it was five hours closer to Nashville.” His ultimate goal was always Music City, “because that’s where the writers were.”

He finally made it in 1995. Throughout his day-job years, he always wrote and performed; in Atlanta, he was in a band called Lone Walter. These days, Cullison appears solo or with a variety of friends and collaborators in the states and Europe, where he first released the EP Roadhouse Rambler in 2011. (His second CD, Blue Collar Tired, came out in 2007.)

Like most musicians, Cullison spends his share of time in bars. And like most country-influenced players, he’s sung his share of “tears in beer” tunes. But one night, while performing at the late Nashville bar the Sutler (lost, sadly, to developers), a thought struck: “Instead of having somebody sitting on the customer’s side of the bar crying in their beer, what if we turned it around?”

That was the genesis of the Mark Robinson-produced Barstool Monologues.

“Songwriting is storytelling, so it kind of fit for me,” says Cullison, who also has plenty of “behind the song” stories. One of his favorites involves the opening tune, “Wish I Didn’t Like Whiskey” — a perfect choice to open an album set in a bar.

“I had bought a drink for a friend of mine,” Cullison relates, “and as I handed her the glass, she said, ‘I wish I didn’t like whiskey so much.’ I excused myself for a minute while I wrote that on a coaster. Turned out to be a very good song.”

They’ve all turned out to be very good songs — vignettes, actually, sung and performed by some of Nashville’s finest. If Cullison has his way, Barstool Monologues might even turn into a musical of some sort, with actors and stage sets. Life-sized, like a Johnson tableau. Only even more real, because we can recognize the characters in Cullison’s stories. They’re our friends, our exes … or maybe even ourselves.