No End In Sight - Single by Darin and Brooke Aldridge 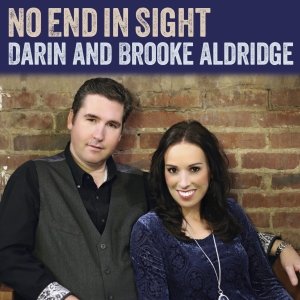 Coming off a year of remarkable success, North Carolina’s Darin and Brooke Aldridge bring their new single “No End In Sight” an impassioned anthem that serves as the perfect follow-up for their success trajectory.

“No End in Sight” is a love song. Optimistic, heartfelt and inspiring. It’s a staccato groove that punches a tight rhythm behind Brooke Aldridge’s flowing vocal lead that soars above and shows again why she is the reigning IBMA Female Vocalist of the Year.

The song is performed by an elite line-up of players including Darin Aldridge (winner of the 2017 IBMA Momentum Mentor of the Year) on mandolin, the unique guitar work of Zeb Snyder (Snyder Family Band), accomplished bassist Mark Fain (Ricky Skaggs and Kentucky Thunder/Chris Hillman), and the skillful fiddle and vocal harmony of band member Carley Arrowood, winner of the 2017 IBMA Momentum Instrumentalist of the Year. The song also welcomes the sophisticated style of newest band member Matt Menefee (Cadillac Sky/ChessBoxer) who brings a New Grass touch to the banjo work.


"No End In Sight" is a fun and playful song with a meaning similar to our last album title Faster and Farther. Faster and Farther in a sense that we are continuing to grow in our music and career. "No End in Sight" is an upbeat song of love telling the listener of a relationship that seems to have no ending point. Just like our own marriage and career, we're reaching goals with an unlimited future."
-Darin and Brooke Aldridge-


“No End In Sight” is available everywhere to stream, download or purchase digitally and releases to radio February 9th from Mountain Home Music Company.


About Darin and Brooke Aldridge:
Husband and wife duo Darin & Brooke Aldridge drew on the traditions of their native North Carolina, the savvy of a young, gifted band and their own dedication to ingenuity to create the most adventurous album of their career with their critically-acclaimed 2017 release, Faster & Farther.

The duo in 2017 placed 4 tracks at the top of the Americana/Roots, Bluegrass Unlimited and Bluegrass Today charts. They have received multiple nominations from the International Bluegrass Music Association (IBMA) the Society for the Preservation of Bluegrass Music of America (SPGBMA) and Inspirational Country Music (ICM). Their music videos “Wildflower”, “Tennessee Flat Top Box” and "Mountains of Mississippi" were heavily featured on outlets including CMT Edge, GAC, Bluegrass Ridge TV and The Bluegrass Situation. TV appearances include PBS, Great American Gospel, The Bluegrass Road, RFD-TV, Blue Highway TV, Songs of the Mountain, Woodsongs and Music City Roots on PBS.

Brooke, the 2017 IBMA Female Vocalist of the Year, has been lauded for having one of the most powerful voices in any genre of music and Darin, the 2017 IBMA Mentor of the Year winner, is a highly sought-after multi-instrumentalist. Together they combine rich harmonies with impeccable musicianship to create the unmistakable sound that has made them one of the hottest young acts in acoustic music today.