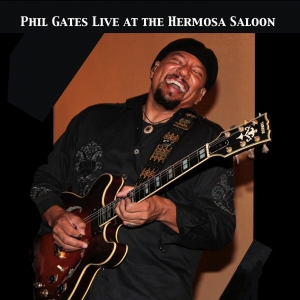 Phil Gates Live at the Hermosa Saloon
The test by fire for any blues musician is before an audience, holding nothing back while reaching to produce a cathartic experience. When the performance is recorded, however, it must hold up to repeated listenings. Los Angeles singer, songwriter and guitar dynamo Phil Gates more than withstands the scrutiny with his devastating live set before a riveted crowd in Southern California.

On his fifth release, the Chicago-born artist delivers an 11-song set of tough and tender originals spiced with two cool covers backed by the heavy grooving Ron Battle (bass), Keith Williams (drums) and Morris Beeks (keyboards). “Addicted to the Blues,” the title track of his previous record, contains a spiky Delta blues riff and smoldering vocals exposing his “jones” over a limber shuffle beat. Gates twists his guitar into a pretzel on nearly every track and the Junior Wells classic “Messin’ with the Kid’ is perfect for a virtuosic display exploding into dynamic ecstasy. Slippery funk on “Away I Go,” with stunning harmony vocals in the irresistible chorus, supports hip “rapping” like “I’m thinkin’ about you, baby, and I’m thinkin’ I like you, girl. And I’m thinkin’ about my thinkin’and the more I think, it’s away I go.” The sensuous riffs and swaying rhythm of the 8-bar R&B “Used Me Up” provides the appropriate forum for a heartbroken tale intensified by crying slide guitar.

A fond look back in the soothing, funkified soul of “Old School” is a showcase for his exceptionally nuanced and mellifluous vocals, along with the idiomatic organ stylings of Morris Beeks. Highlighting his creative interpretive talents, Gates transforms the Lovin’ Spoonful minor key classic “Summer in the City” into a swinging jazzy number made more dramatic by his bluesy vocal and Beeks’ organ solo. The propulsive shuffle “End of Time” powers back up with a wallop as Gates proves his bonafides with stingingly authentic solos sounding like they could go on forever while he sets his lover straight with “Well, it’s you and me, baby, that’s the way it’s gotta be. Yeah, it’s you and me, baby, we don’t need no company.” The “Evening Train,” a veritable roots music seminar, is Gates’ contribution to the repertoire of train songs as he drives between Memphis, Nashville and New Orleans with Keith Williams providing the “locomotive” shuffle beat while the guitarist picks rolling licks with uncommon fluency.

The back-snapping funk of “Take it Out” with the exuberant, hypnotic chorus of “Let it go, let it go, take it out,” caps the metaphor of “taking out the trash” as Gates “preaches” the benefits of jettisoning the burden of negative thinking. Warming to his calling, he warns “Hard times wouldn’t leave us, they came to visit and they stayed…you said you can’t take it…so I said, well you can leave it, and watched you walk right out my door” on the gospel vamp of “I’m Lost,” his soaring, searing guitar solos screaming for release. “Get Around to Me” closes the show on an insistent funk groove while Gates tells a contemporary version of unrequited love through “When I thought I was on your list, of things you had to do today. Then I got a text from you this afternoon, said ‘I can’t make it, I’ve been delayed’.” Sublimating his desire, he lets his emotions erupt in a torrent of raw, passionate guitar notes that build to a shuddering climax.

Phil Gates is a unique singing, writing and instrumental voice in the blues, his outsized talent dwarfing the accomplishments of lesser lights. Exemplifying every virtue of traditional and contemporary blues, he has broken out with a modern masterpiece.