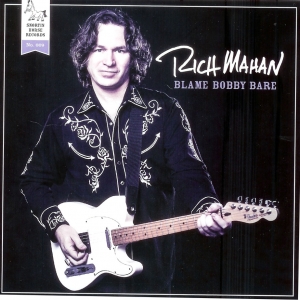 The Singer, Songwriter and Musician Attracts Legendary Session Players for a Freewheeling Country-Rock Album About Love and Liquor, Delivering a Saturday Night Record of Love Songs for The Barstool Impaired

Mahan recorded BLAME BOBBY BARE at the Rendering Plant in Nashville with producer Brian Harrison (Shelby Lynne). The songs include performances by celebrated studio musicians like harmonica master P.T. Gazell, who played for years with Johnny Paycheck, and pedal steel guitarist Robby “Man of Steel” Turner, who’s worked with everyone from Waylon Jennings to Frank Sinatra. The familiar voice heard singing background through much of the album is Bekka Bramlett, a solo artist, former member of Fleetwood Mac and daughter of ’70s rockers Delaney and Bonnie Bramlett. Other friends on the record include Aaron Beavers from Shurman, Bryan Owings on Drums (Emmylou Harris, Delbert McClinton, Tony Joe White), and Nashville Superpicker, JD Simo.

All agreed to join Mahan in the studio after hearing his songs, which evoke the vivid storytelling, rowdy sound and hedonistic impulses of outlaw country in the ’70s. That influence helps shape tracks like “Mama Found My Bong,” “Rehab’s for Quitters” and “Tequila Y Mota.”

As you would expect from its title, one of the album’s primary influences is Bobby Bare. This legendary country artist’s string of hits spans three decades and ranges from the playful (“Tequila Shelia,” “Quaaludes Again”) to the poignant (“Streets of Baltimore,” “How I Got to Memphis.”) For this album, Mahan chose to cover “Put A Little Lovin’ On Me,” a hit for Bare in 1976 from his album The Winner and Other Losers.

“Growing up, I remember how stressed out my dad would get from work. But on the weekends, he would cut loose and crank up these great records by Bobby Bare. He would dance around the living room playing air guitar to ‘Tequila Sheila’ and ‘Dropkick Me Jesus Through The Goalposts of Life.’ Those songs made him forget about his troubles and just have a good time. I wanted to tap into that power and make a record that makes people feel good. So if you wonder where I got the inspiration to write the songs on this album, you can Blame Bobby Bare!” - Rich Mahan
BLAME BOBBY BARE

(Snortin Horse) Bless Bobby Bare! Well, always bless him, but this time specifically bless him for inspiring this fun, well-crafted, countrified outsider Opry music album. And while you’re at it, blame and bless David Allan Coe, Vince Gill, Shel Silverstein, Kinky Friedman, and even Jimmy Buffett. I love you Mahan!


Good songwriting seems to attract prominent session musicians like moths to a flame. The chemistry that develops can be magic. In the case of Rich Mahan’s Solo Debut; “Blame Bobby Bare” there is no shortage of magic. Providing background vocals is Bekka Bramlett, a solo artist, former member of Fleetwood Mac and daughter of ‘70’s rockers Delaney and Bonnie Bramlett. Songs feature distinguished studio musicians such as P.T. Gazell on Harmonica, and “man of Steel” Robby Turner on Pedal Steel Guitar. Other studio musicians include Aaron Beavers, Bryan Owings on drums, and Nashville super-picker, JD Simo.

‘Blame Bobby Bare’ should be listened to just a little more on the loud side. The two other elements that might enhance the listening experience are a boatload of beer and a bottle of tequila. The songs are upbeat and the lyrics are witty and to the point. I liked the story behind the album title and rather than spoil it, I think I’ll let you pick up the CD on your own to find out what I’m talking about. You can’t listen to this music and not put a smile on your face.

My High School Communications teacher told us that you need to listen to an album (those round vinyl things) at least five times before you ‘psychologically’ enjoy an album. Now that I’m much older than the age of my teacher at the time, I can tell you he was wrong. I was thoroughly enjoying ‘Blame Bobby Bare’ at the second playing. If you enjoy pure country with a twist of hemp – this just might be the best CD you pick up this year.


Google translation from Dutch to English:

In 2010 settled Rich Mahan spread from California to Nashville, Tennessee to be there seriously going to collapse on songwriting and his passion for country music. On the west coast was his contribution so far been quite modest, though he was one of the co-founders of the alt. country band Shurman. In his early years he left the piano to guitar and discovered the blues, garage rock and new wave, but was especially touched by the eclectic music of The Grateful Dead. This discovery explained his love for the country exposed, again provided by the fact that his father at the weekend went completely unrelated to the work of country legend Bobby Bare.

Now, two years after its establishment in Nashville, Mahan comes with his debut Blame Bobby Bare. We need Bobby Bare nothing to blame, because this album is one of a very big promise. A record that immediately after the first spin complacency lingers in the memory and you do already longing for a sequel.

Mahan knows how to Blame Bobby Bare to surround with mere musicians. Thus Bekka Bramlett, former member of Fleetwood Mac and daughter of ’70s duo Delany and Bonnie Bramlett, expanded to admire. Bekka has a divine, with a sharp edge surrounded backing vocal at its disposal a number as Favorite Shirt, a song with absolute hit potential by infectious mix of rock and soul, that extra know how to give.

Money In The Bank grandiose dominated by none other than JD Simo, one of Nashville’s biggest gitaarpickers and knows his slide with a grand atmosphere drop that makes you think back to the compelling album Bring The Family John Hiatt. JD Simo is again masterfully seasoned with humor Rehab’s For Quitters where he expanded his talent knows picker to display. This number is also PT Gazell on harp to hear played for years with none other than Johnny Paycheck.

Mahan thus makes a very nice debut with Blame Bobby Bare. A plate that also makes clear that Mahan excellent singer-songwriter has properties and its preference for a warm, authentic and analog studio sound he knows Bobby Bare Blame the right content to provide. Blame Bobby Bare houses Nashville’s most pretentious promise from 2012.

Glowing Review of ‘Blame Bobby Bare’ from Music News Nashville
As a child, Rich Mahan recalls how the free and easy sounds of Bobby Bare helped to serve as a healing stream of sorts to his father when he would get stressed. For his latest album, the California transplant name-checks Bare for the title, but also that quirky and irreverent style that he personified in his recordings.

Stylistically, Mahan shows his blues influence all over the place. There’s a hard driving sound to the opener, “Math,” and Mahan knocks it out of the ballpark with his sense of humor. It is a downright blast to listen to, and Mahan pulls it off with a heavy dose of charms.

He strikes a soulful tone on the Kid Rock-ish “Favorite Shirt,” which has gotten quite a bit of attention as of late, as he also does on “Money In The Bank.”

Mahan proves himself to be a top notch singer, as evidenced on the cut “Tequila Y Mota,” but it’s his songwriting that I think is the most appealing aspect of this album. Kudos to him for writing “The Hills of South Dakota,” after all, the state doesn’t get a lot of musical air time, does it? Maybe the best pair of songs on the album are the totally irreverent and politically incorrect “Mama Found My Bong” and “Rehab’s For Quitters.” The above mentioned cuts showcase Mahan’s genius as a tunesmith.

Ironically, the song that might have the best chance for airplay is one from the Bare catalog, a late 70s gem titled “Put A Little Lovin’ On Me.” I could see this being really big in the Americana / Texas market. I can’t wait to hear more from Mahan. He’s got the vocal chops, the writing, and the humor to pull them off. Take a listen to this, you’re going to love it!

Blame Bobby Bare review in Midwest Record
RICH MAHAN/Blame Bobby Bare: When Bare left RCA for CBS, he made some of the coolest, under rated outlaw country records that still sound new today, partly because they were barely heard at all back then. They were heard by Mahan’s pop who would decompress after work having a great time hearing those records. And it influenced Mahan. And he’s not ashamed to admit it. Screw all that mush mouthed ‘in the tradition of’, ‘influenced by’ and all that bio page garbage the talent impaired over rely on. Mahan owns it. This stuff was injected in his DNA and it’s time some props were given by someone other than Bobby Bare Jr. Meanwhile, these are mostly originals that were just as influenced by Shel Silverstein as Bare, but because Mahan gives it his own voice it works and it never feels derivative. I hope Mahan’s pop likes it and that Bare hears it and returns the favor. You should hear it too. Insidious, contemporary outlaw to the max. Check it out. ”
- CHRIS SPECTOR, Midwest Record (Nov 03, 2012)