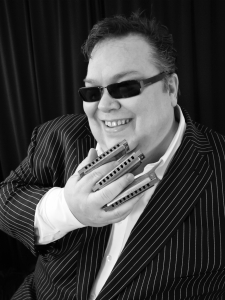 Recognized as one of the great influential blues artists of Quebec, Rick L. Blues has brilliantly managed his band for over fifteen years. Winner of 5 Lys Blues awards since 2007 and privileged guest at major festivals and events in Quebec, his reputation has extended far with two appearances at the Festival Blues-sur-Seine in France.
Several TV appearances, including two exceptional shows on Belle et Bum, gave him the opportunity to reach a wider audience.

With five albums already under his belt, Rick released his sixth in May 2012. "Good Luck On My Side", recorded and produced by Iguane Records, showcases new material laced with West Coast Swing, Blues and Boogie. On stage, his warm and colorful voice mixed with exceptional harmonica playing blend to produce a unique swing that is beyond comparison. Impeccably dressed and a remarkable showman, Rick L. Blues offers a stunning and classy performance during each of his shows.
3
What's This
Advertisement