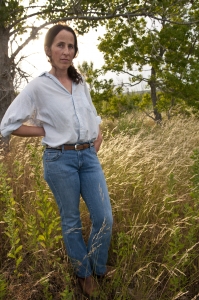 Rita’s style of country-folk has been lauded for story and sense of place, and her performances praised for capturing the audience. "Rita Hosking held our audience spellbound with music that was thoughtful, intelligent & authentic," (Rob Poole, Kansas presenter.)
Honors include winner of the '08 Dave Carter Memorial Songwriting Contest at the Sisters Folk Festival, finalist in the '09 Telluride Troubadour Contest, and more. "This California girl comes by her mountain-music sensibility with true authenticity, with original songs deeply rooted in her family's frontier experience," (Dan Ruby, FestivalPreview.com) and Rita’s fans call her “the real deal.” A descendant of Cornish miners who sang in the mines, Rita grew up with deep regard for folk music and the power of the voice.

Rita began recording and publishing in 2005 with Are You Ready?, and followed in 2007 with Silver Stream. Come Sunrise, Rita's 2009 record, won Best Country Album Vox Pop in the 2010 Independent Music Awards. Burn, from 2011, was placed in the top 10 "Young Female Artist releases for 2011" by No Depression magazine, and listed as a "Hidden Gem of 2011" by the UK's Observer. Both Come Sunrise and Burn were produced by Rich Brotherton--producer, engineer, and guitar player in the Robert Earl Keen Band.
Rich's studio in Austin, Texas, Ace Recording, is where Rita recorded her most recent album as well. The Daily Mirror characterizes Little Boat, her 2013 release, as a “short, but oh so sweet, lean and lovely set of seven songs introducing this Californian’s clawhammer banjo playing daughter, Kora Feder, 18, who is blessed with mum’s unerring delicacy of touch.” The UK Telegraph listed Little Boat as one of the “Top 10 Country Albums of 2013.” Rita is releasing a digital single by the name of “Where the Grassroots Grow” in June of 2015, and a new, concept album is in the process, to be released in fall of 2015.

In live performance, Rita will play solo but most often appears as a duo with her husband Sean Feder on dobro, banjo and percussion. Sean’s eclectic, multi-instrumental history includes over 10 years as a percussion performer/teacher, collaborating with the likes of Arthur Hull and Joe Craven. He soon expanded early string and rhythm training into dobro and banjo, which lend themselves well to Rita’s songs.