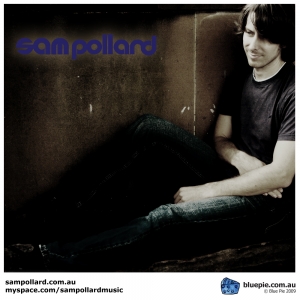 Sam Pollard goes No 3 on the ARIA physical singles chart with his song " World Of Difference ". Sam we congratulate you on a job well done. With all the excitement around Sam he will be announcing a string of live dates in the coming month. Sam is set to record in the USA with his follow-up album to the EP " World Of Difference " . There are talks underway with some of the biggest names in the business, all wanting to work with Sam, and so they should he is damn good!!! With all around the world now saying that " World Of Difference " will be a standard for years to come.

About Sam Pollard
Sam Pollard began playing the piano at the age of five and has never looked back. Sam is a gifted composer and an accomplished multi instrumentalist. He plays piano, keyboards, electric and acoustic guitars, cornet, trumpet and trombone and has a voice that can brilliantly blend various styles to create the sound that is “Sam Pollard”. Raised in the UK but relocated to Australia, Sam's musical influences include the best of British rock as well as classical and jazz styles. Classically trained, with live experiences ranging from rock to big band jazz and improv, Sam's excitement for music shines through in his performances.
Sam's debut album "World of Difference" produced by Jimi Maroudas at "Sing Sing" studios has received a GrIndie award from RadioIndy who said, “Pollard’s vocals are rhythmical and have a fashionable flair of alternative pop/rock. His lyrics are narrative and bouncy and he delivers a message within each song as a chronicle of events”. The album also caught the ears of Blue Pie’s CEO, Damien Reilly who quickly signed Sam up to the Blue Pie family and invited him to Sydney to perform and showcase his talents.
You can now download Sam's music at over 600 leading digital retailers around the planet.
If you want the old skoooolllll CD then you can order this online at www.bluepie.biz


< Go Back
3
What's This
Advertisement