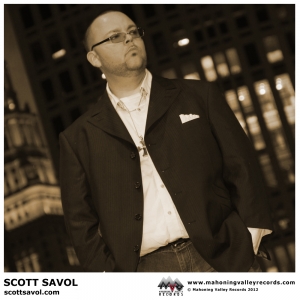 Having had a career which sky rocketed in season four of American Idol, Savol has continued to create music after placing 5th in the competition. Seen as an everyday man with a strong passion for life and for music, Savol touched the hearts of many during his Idol journey.
Born and raised in Ohio, Savol has had a large gospel influence that has inspired his soulful sound. Despite not having had any vocal training prior to American Idol, Savol has been able to create amazing tunes with a smooth vocal tone. His first post-Idol single, ‘Don’t Rush’ began his solo career, and in 2010, when he was signed with Mahoning Valley Records, he created the single ‘Beauty Queen’.

Fast track forward to 2012 and Savol stays pure to his style and does not cave towards mainstream trends. His unique sound gives him his edge, which can be heard in ‘Amazing Love’.

You can check it out at www.airplaydirect.com/music/scottsavol or go directly to his MySpace page at www.myspace.com/whitevelvet
Mahoning Valley Records and Blue Pie Records are proud to be working with Scott Savol in launching his new single.

The single will be serviced to radio exclusively by AIR PLAY DIRECT.


< Go Back
1
What's This
Advertisement