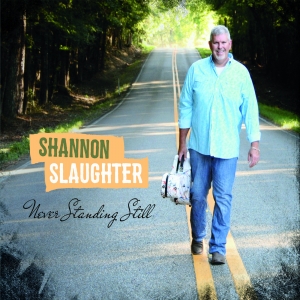 “That Old County Road” was written by Shannon Slaughter and Rusty Hendrix (guitar player from the country band Confederate Railroad) and takes a nostalgic look at growing up in the country and what young people did back then, with maybe a nod to the present as well. The new single is available to radio programmers at AirPlayDirect.

More about Shannon Slaughter:
Slaughter is a proud alumnus of numerous leading bluegrass bands counting membership in The Lost & Found, Larry Stephenson Band, Melonie Cannon, Lonesome River Band, Lou Reid & Carolina, and Grasstowne. These bands and bandleaders helped shape the foundation of his band County Clare which he formed in 2010. "Being around leaders like Allen, Dempsey, Larry, Sammy, Lou, and Alan really helped me understand the business side of the music all the while forming the basis for what I would call my sound. They have really been invaluable to my development as a musician and bandleader," said Slaughter. “I am really proud of the unique sound of County Clare that we have created over the last 7 years.”
In 2012, Slaughter was the 1st Place Winner in the Country division of MerleFest’s Chris Austin Songwriting Contest for his original song, “I’ve Hit Everything In My Life (But My Knees)“ co-written by Dale Felts and Mark Byrd. He has written songs for Blue Highway, Lonesome River Band, IIIrd Tyme Out, Lou Reid, Mike Bentley, Larry Stephenson, and more. In March 2013, Shannon & Heather Slaughter and County Clare release the album One More Road that included 3 radio chart hits including their killer cover of “If I Were A Carpenter.” Shannon & Heather’s follow-up album Never Just A Song, released in February 2015, included their #1 chart radio hit “That’s What’s Good In America Today” co-written by Shannon as well as other chart songs such as “Moonshiner,” “There Ain’t No Need To Be Lonely,” and “Ridin’ The Lightning, Ropin the Storm.”
18
What's This
Advertisement