Dennis Winslow and Shoebox Letters - This Is It 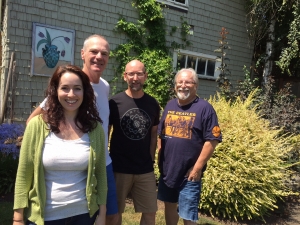 Shoebox Letters Keep It Simple and Keep It Smart
The title of the new album by Shoebox Letters isn’t exactly a tell-all. While Keep It Simple may suggest a series of inconsequential pop songs, it is, in truth, anything but. The sentiments are weary yet resilient, emotional testimonials to love, longing and the hard choices that life often forces upon us. From the rousing title track and the easy ramble of “Can’t Stop It” to the unabashed sentiment evidenced in such songs as “Drinking Still,” “It’s the Thinking” and “Not Ex Yet,” these songs reveal and reflect the difficult road towards attaining romantic relationships that may eventually endure once the hurdles are navigated successfully. It’s not always easy; as they so eloquently express in “Band Aids and Blisters,” it’s often a case of “hoping for something I likely won’t find.” Still despite its sadder suggestions, this isn’t simply a soundtrack to listen to while shedding tears in one’s beers; rather, it’s a series of narratives that relay hard-learned lessons -- full of passion, purpose and perseverance. Indeed, it’s the rumination that dwells below the surface that make these songs so singularly revealing. Even so, the band -- Dennis Winslow, Lorin Lee, Dave Stricker, Stephanie Cox, Greg Paul and Susan Lowery -- are also capable of adding irony to their hard luck tales, as evidenced by the rousing rave-up of the self-effacing “Boss of Bad Decisions.” Ultimately, Keep It Simple marks another triumph for a group that’s consistently proven themselves one of the most remarkably adept Americana bands on the planet today. And that folks, is the simple truth.
By Lee Zimmerman, nodepression.com

Lee Zimmerman reviews Love Sick Town
ELEVEN ALBUMS ON, SHOEBOX Letters have shown themselves to be a band with a deep appreciation for their roots. So it’s especially significant that their new album Love Sick Town finds them ploughing closer to those roots than ever before. In truth, Shoebox Letters have been prepping themselves for just such an accomplishment. Their last album, 2015’s The Road Not Taken, worked its way to the top of the Roots 66 airplay chart, a formidable task indeed. The album scored significant airplay throughout the country, making it the band’s most successful effort yet. Significantly then, singers Susan Lowery and Loren Lee have joined charter members Dennis Winslow and David Stricker, offering opportunity to extend that success with a reconfigured, repositioned outfit that offers their most honest and approachable effort yet. Everything comes across without any hint of pretence, be it the unassuming ramble of “Let Me Love You Again and “Lost,” the steady yet unhurried delivery of “I Fall For You,” the assertive call and response and catchy choruses that punctuate “Lucid,” or the sweet and gentle sigh that glides through “Leave Everything.” In fact, there’s not a single song here that doesn’t make an immediate impression, all the more reason to suggest Love Sick Town marks a significant juncture in a journey that’s been quite impressive thus far.

Lee Zimmerman reviews Shoebox Letters' "The Road Not Taken"
Splitting their base of operations between Portland Oregon and Vancouver Canada, Shoebox Letters have built an impressive catalog thus far, one that encapsulates a tidy penchant for Americana and bluegrass, all delivered with an ernest appeal that recalls the pioneers of the initial country rock crossover, the Byrds, the Burrito Brothers and Poco among them. The tellingly-titled The Road Not Taken, a rapid follow-up to this year’s earlier offering, Buckle Up, notches up another worthy addition to their resume, bringing with it the same instant appeal. Like the nine (!) albums that preceded it, it’s boasts a combination of easy, amiable melodies bolstered by close knit harmonies and swaying steel guitar along with steadfast, assertive songs that affirm their confidence and craft. As always, they express an unabashed honesty and enthusiasm that suggests open prairies, majestic mountain ranges and intimate back porch gatherings. That said, the sound also varies from a rousingly defiant narrative about break ups and heartbreak, “Focus on my Drinking” (“I’m going to focus on my drinking/Stop this ship from sinking/Move on down the highway”) to mournful balladry highlighted by “Whiskey,” a lovesick lament that recounts the pleasure of drowning one’s sorrows, one tear at a time. There are plenty of other highlights as well -- the assertive “Swinging Door,” the sweetly supple “I Don’t Feel Anything” and the rich but remorseful “Unraveling.” If this came from a better known band it would likely be hailed as a masterpiece. As it is, The Road Not Taken ought not to be missed.

Lee Zimmerman's review of "Better Times"
Shoebox Letters
Better Times
(independent)
Despite their unlikely name, Shoebox Letters shine on Better Times, an album of exquisite Americana and stunning performances that strike a responsive chord from the first listen on. Vocalist/guitarist/songwriter Dennis Winslow is clearly the guiding force here, but the help he receives from an array of additional singers-- Stephanie Pranzetti, David Allen Baker, Daria Chick and Bob Logue -- help vary the tone and set the songs apart. “Sweet Talk,” “Drowning Inside” and Hannah” are the immediate standouts, each a combination of subtle hues and resonating refrains. Although the sentiments are occasionally subdued, the melodies elevate the proceedings and prevent them from being over encumbered by static or stereotypical emotions. What’s most surprising however is the fact that Better Times is but the latest in a string of albums the group has released since the start of the Millennium and yet, they still haven’t gained anywhere near the attention they so clearly deserve. So pull out these Shoebox Letters and give them a read. Better Times is nothing less than an awesome album.


From Pink Martini to the Decemberists, Portland is full of renowned musicians. But perhaps none have been as widely heard as Ronn Chick and Dennis Winslow.

The songwriting duo’s music has subtly appeared in film, television and radio spots all over the world, from “Saturday Night Live” to Swedish TV. They have two songs in “Blue is the Warmest Colour,” an explicit French romance that won the Palme d’Or at last year’s Cannes film festival and the foreign film category at the 2014 Critics' Choice Awards, as well as receiving a Golden Globe nomination. But Chick and Winslow weren’t up for Best Original Song contention: their tracks were pulled from a music library, a lesser-known resource that provides the soundtrack for TV show bumpers, film trailers, commercials – any media that needs a quick tune on a tight budget.

The musicians met in the late ‘80s, connected by a mutual colleague, Portland entertainment attorney David Wray. Years later, Winslow stumbled upon the chance to contribute to the Firstcom music library through a Los Angeles friend, and enlisted Chick, a Vancouver, Wash., producer with a home studio. Firstcom would send over an assignment for an album and a small advance, and they’d get to work.

“We were writing sometimes five CDs in a year,” Winslow said. Their projects ranged from an R&B divas record to projects in Spanish and German.

“Luckily, I had a friend of mine whose father was from Germany, and we brought him in and he helped translate lyrics for us,” Chick said.

Starting in 2000, they wrote and recorded around 300 songs for Firstcom, which now end up anywhere from golf tournament broadcasts to CNN news segments.

Music supervisors and producers can find their tracks by searching through an online database for mood or style: the “Blue” tracks came from a collection they made called “Big ‘80s,” with the songs styled after – though not quite copying – hits of the era.

“‘Live for Today’ sounded a little like the Eurythmics,” Winslow said. “And the other song [‘Love Gone Wrong’], Ronn sings, and it was a Phil Collins sound-a-like.”

Placement always comes as a surprise. It might take a year or two for accounting statements from BMI, a music publisher, to catch up and alert the pair that their song is in a notable film. In 2012, they had a track in the Oscar-nominated “Paranorman,” and they’re hoping that their recent high-profile inclusions will draw more attention to their hefty catalog. Every play helps.

“It's a penny business,” Winslow said. “You get little bits here and there and it all adds up.”

If a track gets licensed for on-air use, the library takes a cut and the writers get the rest. In their best run, Winslow said, he made between $25,000-30,000 from their library contributions – the year their song “Short Hair” was used as background music for the prize wheel segment of “Live with Regis and Kelly.” But plays roll in from everywhere: in a page of Winslow’s 2013 BMI accounting statement shared with the Oregonian, “Live for Today” – one of their “Blue” songs – was also played in Norway ($3.21), while “Short Hair” drew revenue from Poland ($1.56), Romania ($.01) and Sweden ($.40), among over two dozen other songs listed that saw play. The statement is 48 pages long.

But the pennies only stack so high. Beyond their library contributions, Chick does music recording and production work, while Winslow works full-time as a paralegal at Wyse Kadish LLP and releases music as the Shoebox Letters, an Americana project now on its eighth album, “Better Times.” With their Firstcom arrangement over, they’ve started work on building a catalog for a new library, Nashville’s Master Recs. They tend to work from a distance – Chick will build a track’s musical structure and email a rough cut to Winslow, who will add lyrics and melodic ideas. Even on solo projects, though, they’re rarely apart.

“We recorded it in Ronn's room,” Winslow said of Shoebox Letters’ latest. “Ronn played almost all the instruments on it except for some additional guitar parts that I did.”