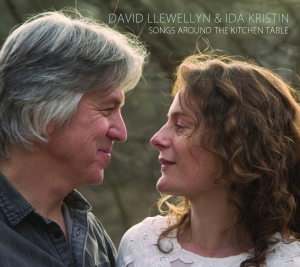 Paired at a songwriting retreat in Sweden in 2008, Welshman David Llewellyn and Swedish Ida Kristin were presented with an afternoon to write a song about a couple sitting in a coffee shop, and discovered a magical connection that has transformed into a finely honed acoustic duo. The spark kindled by this fortuitous collaboration uniting these two acclaimed solo artists, has resulted in the release of their debut folk album, Songs Around The Kitchen Table – a beguiling toe-to-toe
recording, infused with tenderness and intimacy.

Realizing the effortless synergy of how they listened and followed each other in real time, David & Ida captured their interwoven harmonies and guitars in the truest way possible; by setting up a few mics and performing their repertoire on the spot. Talented musician friends from around Nashville joined in adding subtle flavors: Robin Ruddy (dobro) and Tim Lorsch (violin/cello) on “This Morning Blues.”
Catherine Styron Marx (piano) on “The Real Peter Pan,” John Mock (whistle/accord) on “God's Waltz,” Bruce Baxter (accordion) on “Only God Knows” and Dave Jacques (bass guitar) on “Coffee Shop Song.”

The album opens with the trans-Atlantic co-write “This Morning Blues” - an emotional story of parting lovers after a short but profound love affair. “Only God Knows” - asks the big questions: "Why is this world in our safe keeping?" and "Why does ice cream melt so soon..?" “Coffee Shop Song” is a playful take on the universal theme of relationship tit for tat, and is the first song that David & Ida wrote together on that serendipitous songwriting retreat. Inspired by their connection, Ida's song “The Real Peter Pan” and David's “Homeward,” were written for each other. “Just Surrender” is a rallying call for those of us, who ride the fence of love, to say YES!

The classic love song “The First Time Ever I Saw Your Face” by Ewan MacColl - sung as a duet, showcases the heavenly blend and emotional depth of the duo’s voices. During the recording process, David and Ida stepped outside on the porch for an impromptu one-take video shoot of “59th Street Bridge Song” (Paul Simon), quickly garnering a lot of interest on YouTube. The closing song “Turn! Turn! Turn!” is a loving homage to one of the great folk singer-songwriters of the 60's - Pete Seeger.

Throughout 2015 David and Ida will be touring in support of their new album, as well as working on several individual and collaborative projects; including an animated video of their song "Only God Knows" with Spanish illustrator Raquel Aparicio, and David’s new solo album, inspired by his upbringing in the coal mining valleys of Wales.
5
What's This
Advertisement