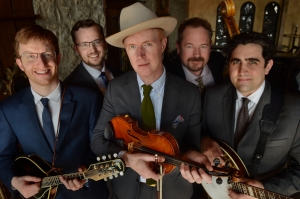 Since forming in 2006, The High 48s have been making music that combines the soulful sound of classic bluegrass with a modern attitude, original songs and a wide range of influences beyond bluegrass.

In a genre created and dominated by artists from the South, The High 48s were born and raised in the Upper Midwest. And in a music scene where playing standards is the norm, The High 48s are a band of songwriters who perform their own material in addition to the “festival favorites.”

The band takes its name from railroad slang for the boxcars originally used to transport troops on the front lines in WWI that could carry 40 soldiers or 8 horses, and were later used in the US on fast-moving “hot shot” freight trains by train hoppers looking for work during the Great Depression.

Daddy Was a Bank Robber, the band’s eighth album, is their most personal — and present tense — release to date, with original music by the 48s (including two songs from the band’s newest member, Mike Hedding) and a handful of covers that represent a musical snapshot of the band’s (very eclectic) record collections, including songs by alt-rock great Robbie Fulks (Goodbye Virginia), bluegrass maverick John Hartford (Long Hot Summer Days), blues singer/guitarist Little Milton (Let Your Loss Be Your Lesson) and the Clash (Bankrobber).
3
What's This
Advertisement